Black, Asian, Latinx alumni tell of segregation at UT ‘as they saw it’ 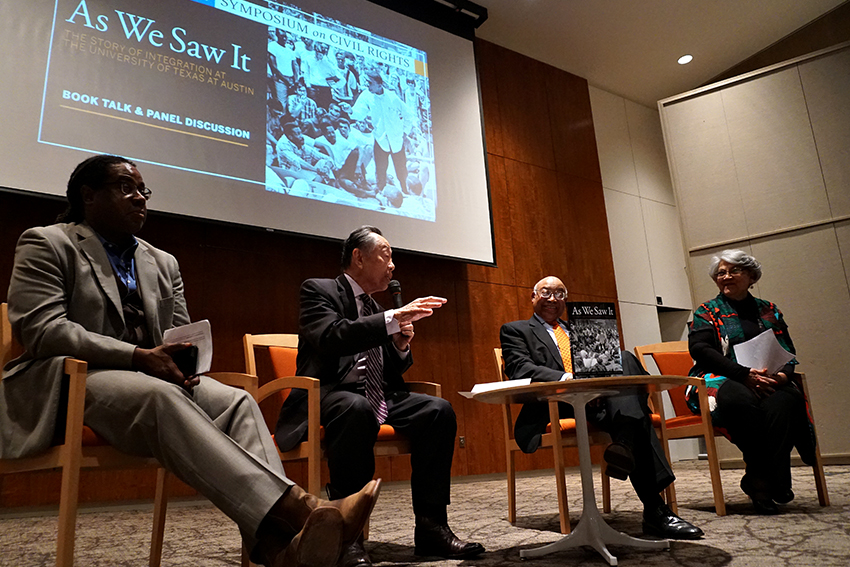 Based on their experience as minorities at UT, three alumni told students they have the power to advocate for change in a panel on Thursday night.

Holland said he grew up in a diverse community in San Antonio and did not expect to be exposed to so much racism coming to UT. When he was watching his first UT football game, the crowds were making racist comments about an African-American football player from USC, and he said that was when he knew his four years at UT were going to be challenging.

“I came to the University of Texas naive, not thinking there were gonna be racial issues, and that turned out to be the highlight,” Holland said.

Holland graduated in 1961, 11 years after Heman Sweatt became the first African-American student admitted to the UT School of Law. Thursday’s panel was part of the 32nd annual Heman Sweatt Symposium.

Martha Cotera, a Latina who attended UT-El Paso in the 1960s, said the work done by African-American activists paved the way for Latinx to join in the movement. Cotera said there were only about 50 Latinx students at UT when she attended, but within 10 years, the Center for Mexican American Studies was established.

“One of the most fortunate things that happened to me in my life is that I happen to come to Austin and be part of the University at the time that we had a full blown civil rights movement led by the African-American community,” Cotera said. “In their generosity, we joined the movement, we were able to express our own needs and then to lead our own future.”

Mitchel Wong graduated from UT in 1960. Growing up as a racial minority, Wong said minority students today should not be discouraged, but should instead build on opportunities presented.

“You have to think for yourself,” Wong said. “There is opportunity everywhere if you just open your eyes. Don’t be victimized. Instead of being entitled, be enabled.”

Computer science junior Harold Jackson said he was impressed by how all three of the alumni advocated for their rights in their own ways. Jackson said the experiences of the alumni are still relevant today because racial prejudice still exists on campus.

“I think for me personally, as a black student, there have been times where I felt instances of racial prejudice,” Jackson said. “I need to recognize that people have pushed forward and done a lot and endured a lot of hardships and suffering to ensure that people like me exist …. So I have to do that for future generations for UT students of color.”