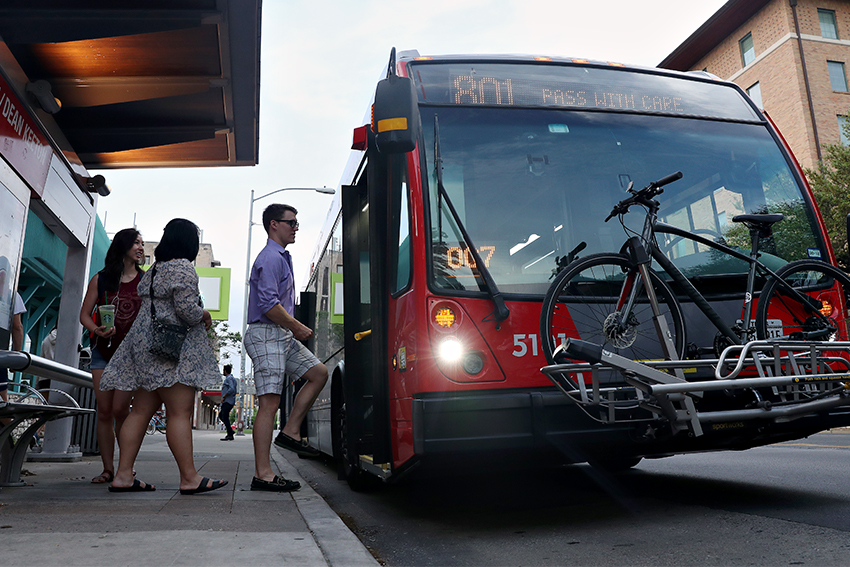 After releasing a few details earlier this month, CapMetro has unveiled its near-complete vision for increasing high-capacity transit routes throughout the Austin area. Some Austinites hope this brings the potential for a rail line to be built right next to campus.

The plans feature 11 routes, including several proposed paths for what CapMetro calls “high-capacity transit,” which will either be light rail lines or “rapid” buses on their own lanes free from other commuter traffic. The path nearest UT is the orange line, which runs from North Austin down Lamar into Guadalupe and past UT to Republic Square. From there, it is met by the blue line which goes across the river into the Riverside area, and the brown line which runs down South Congress.

Specifics on which lines will be rail or bus have yet to be decided. Scott Morris, a representative for the Central Austin Community Development Corporation, said he was disappointed to see the decisions for which routes would receive rail have not yet been made. The Central Austin CDC is a nonprofit that advocates to improve public transit in the area.

“Lines on a map are not something that can give the public a whole lot of material to discuss the (changes to public transit),” Morris said. “And we’ve been waiting months.”

The project, if fully implemented, will likely cost $6-8 billion over the course of several decades. CapMetro asked the city to contribute $15 million toward engineering and environmental analysis. A CapMetro representative told The Daily Texan in an email that the support is crucial and “the agency does not have the capacity to undertake the full scope of work at this time.”

The money could come from a possible bond election in November, or it could be pulled from existing transportation bond funds.

Mayor Pro Tem Kathie Tovo said she would like the money to come from the latter or see if CapMetro can find the funds themselves.

“It’s important to me that the city shows strong support, and if it means allocating some money to get it moving forward, then I’ll likely support that path,” said Tovo, who represents parts of West Campus on the City Council.

Compared to past attempts to improve public transit in Austin, Tovo said she appreciated how there has been a focus on helping students get to campus and other parts of Austin.

“That kind of thinking about how our really significant student population gets in and around the city is really important, and I don’t recall there being such a focus in past plans on that student perspective,” Tovo said.

If it is able to proceed, CapMetro said the plan would “definitely” affect the cost of using CapMetro. However, as the plan will occur in phases, so will any fare increases.

“It seems like it’s going to be really difficult and take 200 years to actually happen,” Murthy said of the potential to put rail lines along Guadalupe. “I’m definitely skeptical, (and) it seems like it would be way too far in the future to affect me.”