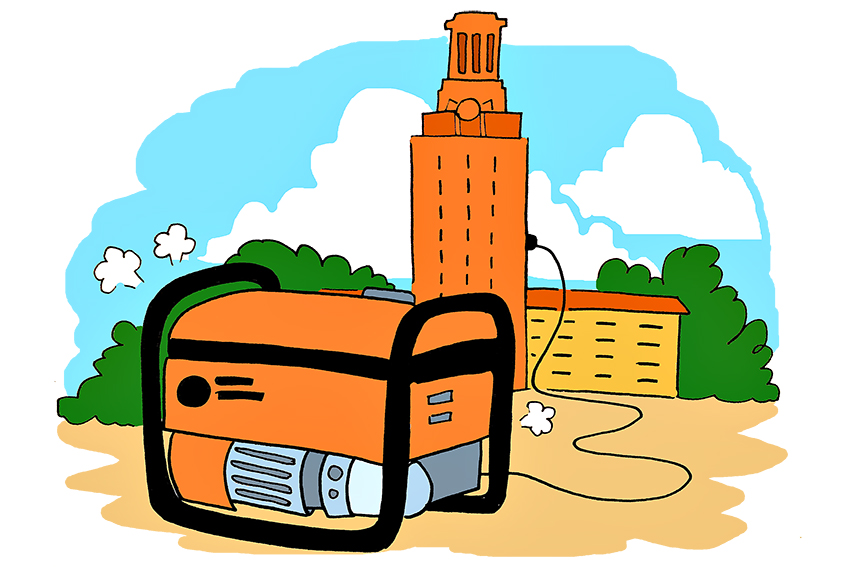 With a team of about 140 people and a single power plant that has been serving UT for decades, Juan Ontiveros said his team holds the power on campus.

Ontiveros, the associate vice president for Utilities, Energy and Facilities Management, said the plant has a budget of $60 million a year to keep all 20 million square feet of campus running smoothly. The power plant saves the University $15 million annually, compared to Austin Energy prices, Ontiveros said.

“We exist so you don’t have to pay the $15 million more,” Ontiveros said. “It’s a source of pride for us to say, ‘Campus, you have more money available to you because we’re efficient,’ and it gives us the satisfaction that your tuition does not go up because of what we do.”

Ontiveros said his team is constantly looking at how they can reduce cost because each dollar they spend is a dollar the University could be using.

“We do our own maintenance, our own programming, our own construction and it is because we believe we can do it more efficiently with our in-house people,” Ontiveros said. “We’re cheaper than contracting it out.”

The University power plant is one of the largest in the nation and is known globally for its work. Ontiveros said other universities produce only part of their energy.

The plant has been producing power since 1929. Nowadays, it supplies 100 percent of the electricity, heating and cooling for the University. Ontiveros said efficiency is an important part of their operation, even 42 years later.

“Our fuel use is what it was in 1976,” Ontiveros said. “In that time frame we’ve added 10 million square feet. It all comes down to efficiency, and we are using much, much more electricity, but the same amount of fuel.”

George Roth, sustainability studies freshman, said energy efficiency is very important to him, and although it is great to see the University working toward better energy usage, the problem does not end there.

“I believe energy efficiency is one of the biggest challenges that we can overcome with the right attention and investment,” Roth said. “However, we need to make sure this energy is coming from renewable sources.”

Neil Crump, manager of Project Management and Construction Services, works on the Tower’s lighting, and said the power plant is essential to keeping the Tower lit at a low cost.

“They’ve won a lot of awards, and they’re pretty much the benchmark for efficient operations,” Crump said. “They keep our campus running.”

All the energy is distributed underground with nine miles of tunnels used to distribute the heating and cooling, and about 30 miles used to distribute power to the buildings. Ontiveros said he has an amazing staff who work on everything from the power plant to the tunnels.

“I’m the head of it but the people do the work, and to them, not providing these services to campus is an insult,” Ontiveros said. “You can’t force that on people. They have to want to do it and do it on their own, and my people do.”