Daniel Nkoola: The nuance of a black content creator 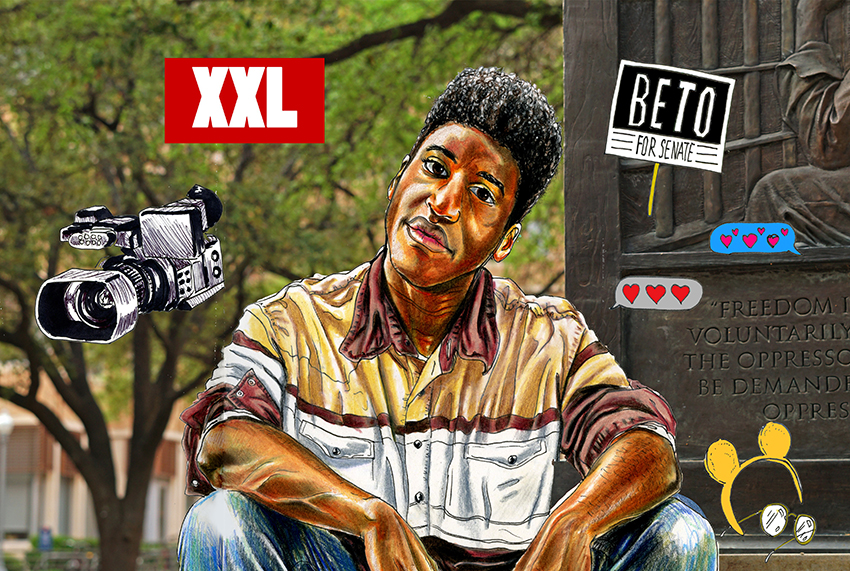 Daniel Nkoola, radio-television-film sophomore, shifts the lens through which audiences receive narratives with his humorous and thoughtful online content.

The Ugandan-born, Fort Worth native has found viral success in his short film productions. Nkoola’s best-known piece is his edgy spin on the PBS series “Arthur,” which now has over 430,000 views on Twitter. In his short time at UT, Nkoola has produced a variety of other videos, all with careful attention to detail.

if #Arthur was an edgy teen drama (Trailer) pic.twitter.com/IDzGbS7Egn

“When (I) watch movies, I’ve started getting into the habit of asking, ‘Who does this benefit? Who is this for? Who does this serve?’” Nkoola said.

Nkoola has meticulously studied the dynamics of modern media.

He expressed his dissatisfaction with the harrowing torture that black bodies often experience on the big screen, such as in the films “12 Years a Slave” and “Detroit.”

“Usually movies that include things like that are surrendering themselves to the white gaze,” Nkoola said. “Because we (black people) are not the ones who need to understand what is real.”

While he acknowledges the potential value in some of those films, he personally aims to produce content that allows his intended audience to experience levity. Nkoola places a great deal of consideration in how he consumes and, by extension, creates content.

While Nkoola’s films are generally more light-hearted, he still accounts for the social dimensions that are at play when it comes to story elements and casting.

His Valentine’s Day release deals with the complicated and specific etiquette of millennial dating culture.

what single people do on #ValentinesDay (1/2) pic.twitter.com/BOlcaejDfu

“Working with Daniel is a great example of working for a true filmmaker because he is so passionate about what he does,” said Abby Goertz, public relations sophomore who starred in the Valentine’s Day video. “Daniel seems like the kind of guy who was born knowing he wanted to do film.”

Nkoola has been intereseted in video creation since joining his high school’s AV club, creating videos that would be seen across the school on the morning announcements the next day.

“Something about making videos with my friends was super rewarding for me,” Nkoola said.

Due to his deep interest in people, Nkoola initially wanted to study psychology. However, he faced the difficult decision that is familiar to many young creatives: pursuing financial stability or taking the more risky path of pursuing art.

Nkoola recognizes that using conventional channels of employment in filmmaking is difficult.

“I also, early on, had an understanding that I would have to sort of craft my own path,” Nkoola said. “When someone makes it a certain way, that avenue is probably closed because now that it has been done, everyone is gonna try that.”

For Nkoola, his prevailing platform for publishing his content is Twitter. In the span of just a few years, Nkoola went from making videos about his high school choir’s bake sale to earning the opportunity to interview U.S. Congressman Beto O’Rourke.

I spent 15 minutes in a car with Congressman @BetoORourke and now I’m in love with him (1/2)#BetoForTexas pic.twitter.com/xKVvbFK8y6

Nkoola says at this stage of his life, he enjoys the freedom of being an online creator and not having to answer to a larger production company.

“I do not necessarily want to wait if I am sitting on something I feel proud of,” Nkoola said. “If there is anyone in the world who can get a smile or a bit of pleasure from something I make, I want it to reach them.”

As the landscape for internet film creators shifts, Nkoola has paid careful attention to current production trends, like the desire for a level of accessibility in online content. This is in part why Nkoola has refrained from using his scholarship money to purchase top-of-the-line film equipment.

“(If I do that) I am no longer just some guy,” Nkoola said. “And I think there is value in being just some guy, especially when people watch and they feel they can do what you are doing.”

After the success of his various projects, people reached out to Nkoola telling him they were inspired to create content.

“Especially as a STEM student, I never really get to explore my creative side,” said Angela Kang, a biology sophomore who worked with Nkoola on a “Kids Next Door”-themed photoshoot. “Daniel definitely inspires me to step outside of my comfort zone more.”

Nkoola is currently working on a web series that parodies XXL Magazine’s annual freshman class, a list of 10 rappers who are up and coming in the industry.

The series will feature characters such as Pluckers God, who, according to the project’s casting call, is sponsored by Pluckers Wing Bar, and required by contract to only rap about Pluckers. Like much of his other work, Nkoola aims to provide a fun experience while also accounting for the nuanced interplay of various social dynamics.

Nkoola’s project will critique, among other things, the fact that in real life, only a small portion of the recipients of the career-boosting honor have been women. The closest thing to a protagonist in the series is CLST, pronounced Celeste.

“The whole thing is that she is the only one on this list that is good,” Nkoola said. “As opposed to doing a story where you learn the dangers of misogyny in hip-hop by having CLST endure all sorts of oppressive experiences and ultimately lose at the end, you see her getting to navigate these things.”

The intricacies that Nkoola wishes to explore in the XXL project reflect his overall approach to content creation.

“A lot of these narratives that surrender themselves to explaining the struggle don’t have us winning in the end,” Nkoola said.“I think that’s the difference — how can we talk about these things in cinema and bring awareness in a manner that doesn’t involve just reenacting suffering that is caused by these systems?”