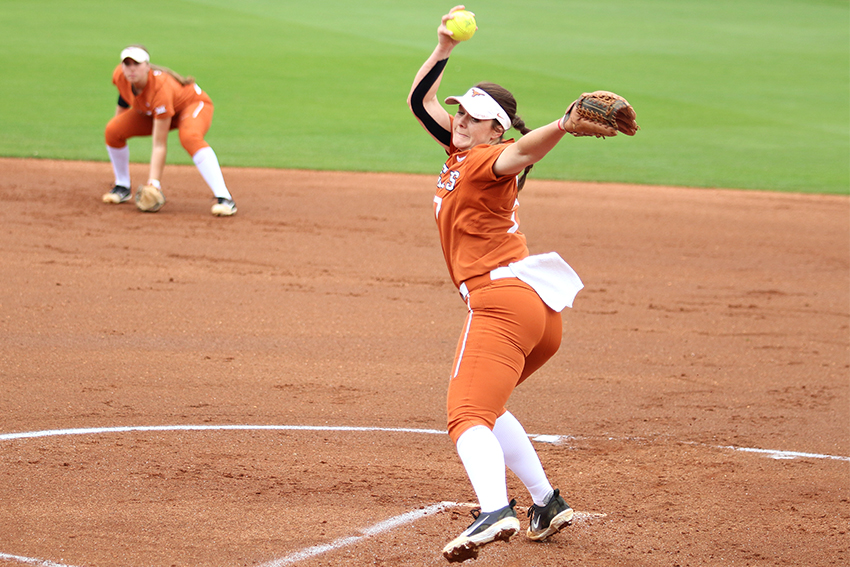 In every postgame interview with Texas head coach Connie Clark, you’ll hear the 22-year head coaching veteran preach how important momentum is to
her team.

For most of 2018, it’s been hard for Clark to pinpoint a time when her ball club has possessed that much desired rhythm. But now, 32 games into the season, it seems the Longhorns have found it.

“I think it’s a matter of their sense of urgency, energy and maturity,” Clark said. “We have a lot of newcomers, but we’ve turned the corner on that as a group, and we’re making the adjustments immediately and getting good information coming back to the dugout.”

Overcoming a tumultuous start to the beginning of the regular season, the Longhorns (19–13, 6–0 Big 12) have won their last seven games, carrying their longest winning streak of the season into Tuesday night’s road game against Houston (22–12, 3–3).

The biggest key to the Longhorns’ newfound success is in the batter’s box.

After averaging only 2.6 runs per game through its opening 25 games of the season, the Texas offense has sprung to life, hitting .284 and averaging seven runs per game during its seven-game winning streak.

According to Clark, a disciplined approach at the plate by the Texas hitters has sparked the Longhorns’ offensive improvement.

“The big hits were impressive, but just as impressive is our eye at the plate,” Clark said. “The way we’re set up right now, they’re having a hard time finding who they want to pitch to.”

Equally as impressive has been the Texas’ performance in the pitcher’s circle and on defense. Since the Big 12 slate began six games ago, the Longhorns rank second and third in team pitching and fielding for the conference, respectively.

A big part of that success is because of senior pitcher Paige von Sprecken, who continues to dismantle hitters from the mound with a 1.76 ERA.

“I think I’m just really confident right now, trusting my stuff and telling myself I can win these games,” von Sprecken said. “It’s my last season, so I’m treating every game like it’s my last and am grateful for these opportunities.”

On Tuesday night against Houston, the Longhorns will seek to define winning not as a streak, but a consistent habit. Texas bested the Cougars to the tune of a 7-3 blowout on Feb. 17 in the Puerto Vallarta College Challenge.

If the Longhorns can find that same mixture at the plate and in the circle, it won’t be shocking to see them continue their winning ways.

But one thing’s for certain — these Texas players don’t want to lose that winning feeling.

“It’s fun to win,” sophomore shortstop Kaitlyn Slack said. “It just brings us this confidence, and we’re going to roll with this.”

First pitch against Houston is scheduled for 6:30 p.m. at Cougar Softball Stadium.