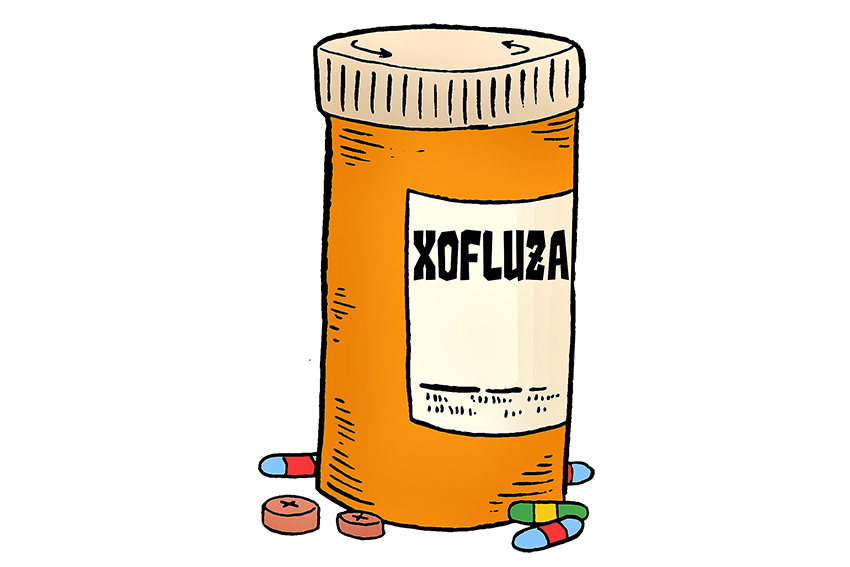 Just one pill of a new flu drug, the product of a research discovery at UT from almost 40 years ago, could be more effective than Tamiflu.

Robert Krug, molecular biosciences professor emeritus, discovered the replication mechanism that the new drug targets, a process called “cap-snatching.” He published his results in the Proceedings of the National Academy of Sciences in 1979.

Viruses need little strips of RNA called “caps” to make messages that force the host cell to manufacture components necessary for building new viruses. But the virus cannot produce the cap on its own, so it has to steal, or “snatch,” it from the host using a protein.

“Cap-snatching is where the virus recognizes the cap, cleaves it and uses that to initiate synthesis of viral components,” Krug said.

Xofluza is a new drug that takes advantage of this cap-snatching mechanism. Unlike Tamiflu, which requires multiple doses over several days, just one dose of Xofluza is enough to disable the virus for good.

“Xofluza inhibits a protein that is necessary for creating messages that lead to proteins being made by the host cell,” Krug said. “Stopping this process is bound to be more effective because if you don’t make those messages, nothing happens.”

Xofluza is a type of chemical drug called an antiviral. Antivirals target proteins that allow separate stages of replication to happen, thus stopping the virus at certain points in its life cycle.

The chemical in Xofluza binds to and disables the cap-snatching protein, which stops replication before it can happen.

In comparison, Tamiflu inhibits the protein that allows the virus to exit from a host cell. It disables the tool that would normally allow a replicated virus to escape and infect other cells. Tamiflu doesn’t stop the first round of replication, it simply stops the viruses from spreading.

The new drug, Xofluza, cuts the virus off earlier in its life cycle than Tamiflu.

Clinical trials, such as those taking place at the Austin Regional Clinic, aim to determine the effectiveness of stopping replication at an earlier stage.

“Preliminary evidence from the trials indicate that it is more effective than Tamiflu — that’s a big step,” Krug said.

Antivirals like Tamiflu and Xofluza can help stop the spread of an infection. However, they cannot take the place of vaccines.

Chris Sullivan, molecular biosciences assistant professor and virology researcher, said that the vaccine readies the immune system before an infection, while an antiviral only works once someone has the flu.

“A vaccine is a preventative,” Sullivan said. “If you have your immune response primed ahead of time, it mutes the infection before you see symptoms. Antivirals are used once you are confirmed to have the influenza virus.”

Even in seasons when the vaccine is not as effective compared to other years, it is still the best defense against the flu.

And while new developments in effective antivirals are exciting, the real excitement will come once universal vaccines exist for the influenza virus, Sullivan said. The flu virus is unpredictable and changes from season to season, which is why a new flu shot is needed every year.

“(Antivirals) are not going to do anything better than a vaccine,” Sullivan said. “These antivirals are certainly beneficial and will save lives, but the real question is when we will have universal vaccines in the future: vaccines where you only have to take one or a few vaccinations over your lifetime to prevent the flu.”

The new drug came off of a discovery that Krug’s lab made four decades ago. Its application represents the benefits to human health that can result from basic research, according to Krug.

“(As scientists) we have to keep telling (the public) examples of basic research that lead to benefits,” Krug said. “We have to convey that you can’t predict what’s going to benefit society, the investment in basic research will lead to something.”

Xofluza is currently available for purchase in Japan. It is not yet available in the U.S, but there are locations in the States testing the drug in clinical trials.