Back in action, Longhorns upend Aggies in spring scrimmage 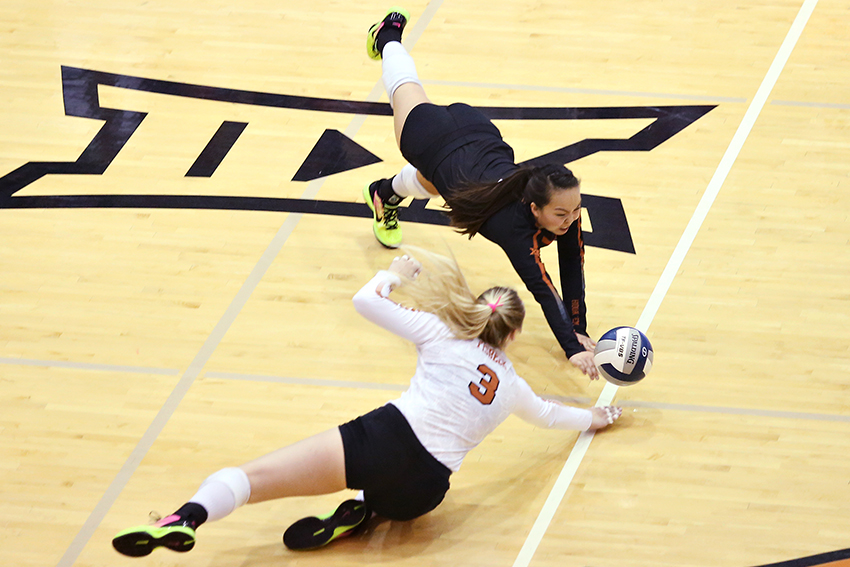 It was one point. Then two. Then twelve.

As the Longhorns conceded twelve consecutive points in the second set, the offseason blues were prevalent. While technique was lacking during that set, chemistry wasn’t.

“It felt frantic at some times,” junior libero Autumn Rounsaville said. “We just tried to come together after each point (and regroup).”

The Aggies matched almost every Texas point to open up the match, staying within two points at the mid-set timeout. However, the Longhorns came out of the timeout and had a 9-1 set-closing spurt.

Texas cruised to a 17-10 lead in the second set, only to concede 12 straight points, and the set, to Texas A&M. Junior outside hitter Hollann Hans used her low, cutting serve to keep Texas at bay and help the Aggies come back. Hans had 15 kills and five service aces on the night.

The Longhorns took the lead early in the first set and never ceded it, cruising to a 25-16 win in the third frame.

Despite falling behind early in the fourth frame, Texas came back to play a contested final frame. Both teams traded points until the Longhorns pulled away from a 23-23 deadlock to take the set and match.

“You can’t even put a word on their potential,” Johnson said. “It’s limitless.”

Both Butler and junior Orie Agbaji got their first stints of extended playing time outside the practice gym, and their offseason work paid off on the floor. Agbaji added six kills and three blocks in the winning effort.

For head coach Jerritt Elliott, Texas’ scrimmage was an opportunity to shake off rust and tinker with a shorthanded roster.

“The rust has been part of the spring,” Elliott said. “You play so many different lineups, but more so we wanted to see a high performance level.”

During the offseason, Texas graduated three seniors and lost star freshman outside hitter Lexi Sun, who transferred to Nebraska. This left the Longhorns with plenty of voids on the court to fill.

As a result, Wednesday’s scrimmage provided the Longhorns the opportunity to switch players around and try different positions.

“We definitely get better at playing every position,” senior middle blocker Morgan Johnson said. “It makes us more scrappy … it makes us want to work that much harder to overcome the bad hand that was dealt to us.”

Along with the departures, the Longhorns faced a lot drama within the locker room. On top of the questions surrounding Sun’s departure, fellow freshman Olivia Zelon departed the program, highlighting her grievances in a blog post in early January.

The Longhorns didn’t let the off-court drama get in their heads, using it instead as an opportunity to become closer as teammates and find new leaders to turn to, such as Rounsaville.

“We were in the eye of the storm this spring,” Johnson said regarding the offseason drama. “It showed our determination to work for what we want and ignore all the stuff going on around us.”

With new leaders and changes taking place, Texas’ spring season is poised to be an interesting one. Texas’ next scrimmage is set for next Thursday, April 12, against Texas State. First serve is slated for 7 p.m. at Gregory Gym.