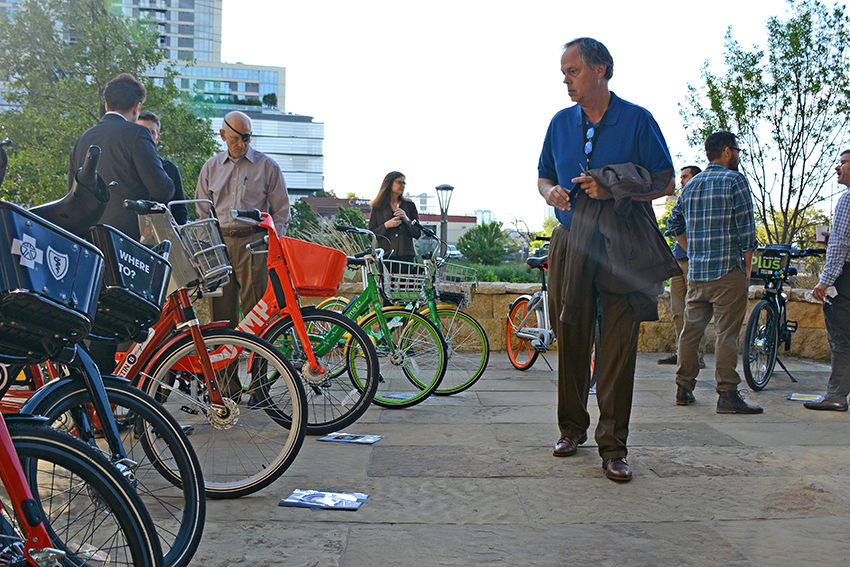 The sun may have been just rising Wednesday morning, but that did not stop city members, companies and the community from gathering at the Austin Central Library for a pitch session on bringing dockless bikes to Austin city streets.

“We are looking for feedback from the Austin community about what they’re looking for from Austin mobility,” said Laura Dierenfield, active transportation program manager at the City of Austin. “There’s a lot of ways that bicycles can help to advance someone’s mobility day to day, so we are looking for how this form of bike share can help serve our community better.”

The event followed the city’s announcement last month that it would be testing dockless bicycles, which don’t have to be returned to a dock, in a 12-month pilot program. Wednesday’s forum brought different companies to pitch their plans to stock Austin with stationless bicycles and was followed by a panel discussion about potential programs.

Austin B-Cycle currently supplies the city with station-based bikes. Elliot McFadden, executive director of Austin B-cycle, spoke about the program’s progress but said they are choosing not to add dockless bikes to their fleet.

“We looked at dockless bike share three years ago, and … I think there are a lot of problems with the model in a large scale,” McFadden said. “We think stationed-based bike share is a good model, and is the future for high use areas.”

During the rapid pitch portion of the meeting, 10 different bike share companies described what they had to offer Austin. In their pitches, many dockless company representatives turned their attention to UT, including alumnus Lance Li from bike share company Mobike.

“The thing about dockless is they are always on demand,” said Li, director of policy and regulations at Mobike. “(For example), UT is a huge sports school. When there is a football game or a basketball game, we know people who parked far away are going to be coming in. We can maneuver bikes there to help reduce the congestion during those times.”

Li said the bikes would work the same way in areas like West Campus, making the commute to campus easier for students and helping to decrease traffic.

During their pitches, speakers pointed out that in some cases, issues have been raised with users leaving the vehicles in inappropriate or irretrievable places. In some cities, dockless bikes have ended up in trees, lakes or covered in dirt. They emphasized their plans to combat this issue, from integrated bike locks that ensure vehicles are parked in a rack, to a rewards system for parking the bikes appropriately.

Tristan Heinen, a member of the Campus Bike Alliance, the city’s Bicycle Advisory Council, said while it is good to have public discussions about bike share, there are still some major questions the city has to keep in mind, such as how to keep bikes from causing clutter.

“It’s kind of like a tightrope, you have to balance having a lot of bikes, having a good reach and access with not cluttering up the environment,” Heinen said. “In a dense area such as north of the University and West Campus, there’s already a lot of construction, there’s a lot going on. I think balancing that will be a big challenge, but it’s also still a big opportunity.”