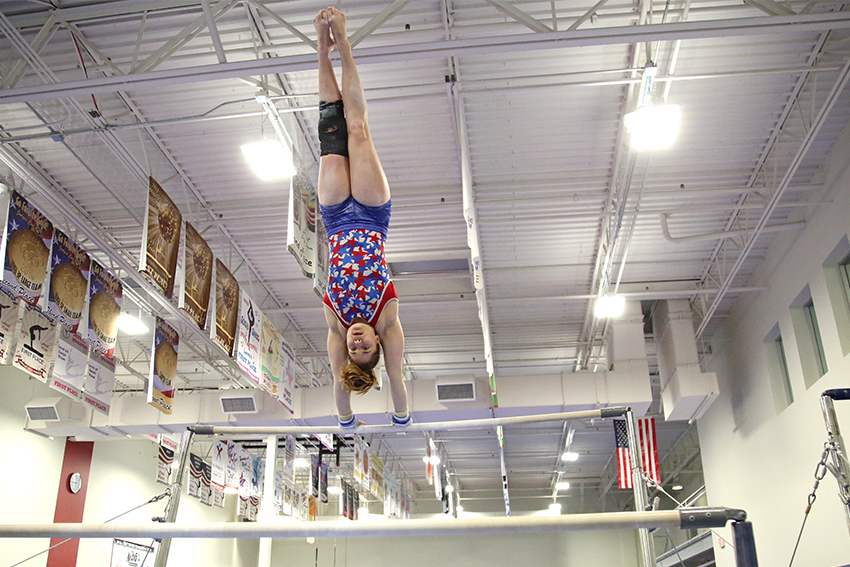 Learning a new skill is never easy, especially when it comes to flipping your body upside down for the first time in hopes of achieving a perfect landing on a four-inch beam.

The University of Texas’ club gymnastics team allows interested individuals to compete or join the recreational team based on their own comfort level.

Junior gymnast Alex Lyons, who had no tumbling experience prior to joining the team, was enticed by the idea of being a competitive college athlete. But after Lyons suffered an ACL tear from falling off the beam while doing a cartwheel, she questioned whether or not the sport was really for her.

“My mom, dad and grandma told me I shouldn’t go back to the sport,” Lyons said.

Even after suffering a major injury and struggling to simply walk to her classes, Lyons didn’t want to leave the supportive environment and friends she loves.

It is the support from all members that fosters such an inviting environment. The team accepts all skill levels, ranging from elite gymnasts to those who have never done a forward roll in their life, public relations chairman Catherine Young said.

“We are a family. The best of the best all support each other,” Young said. “It is a welcoming atmosphere no matter who you are. It is a really nice place to be.” Similar to Lyons’ time of struggle, social chairman Liam Fagan also felt an immediate attachment to gymnastics and the people on the team after dealing with the loss of his mother to brain cancer.

“Now that I’m back in gymnastics after quitting sophomore year, I’m realizing that it is one of the things that helped me get through my mom’s death,” Fagan said. “It is a huge part of my life and my therapy.”

The feeling of family also comes from the high amount of trust and support members must give each other in order to succeed. All the members are either self-taught or have received training outside of UT gymnastics.

“Even though you don’t have experience, and if you’re scared, do it because it is such a fun experience,” Lyons said. “It is what makes my UT experience worth it.”
The team is also one of the only UT club sports that does not have a coach.

“We have to coach ourselves,” Young said. “Although we do have members that are coaches, we can’t spot each other. We rely on videoing each other, watching them and critiquing them.”

Team members also bond over their “Flips For Tips” fundraiser, which is done at almost every football tailgate and repeated multiple times throughout the year. Team members stand on the intersection of 183 and 360 performing tumbles to help raise money.

From fundraisers to the value of teamwork, especially when working without a coach, Lyons said the gymnastics club team is what makes the UT experience worth it.