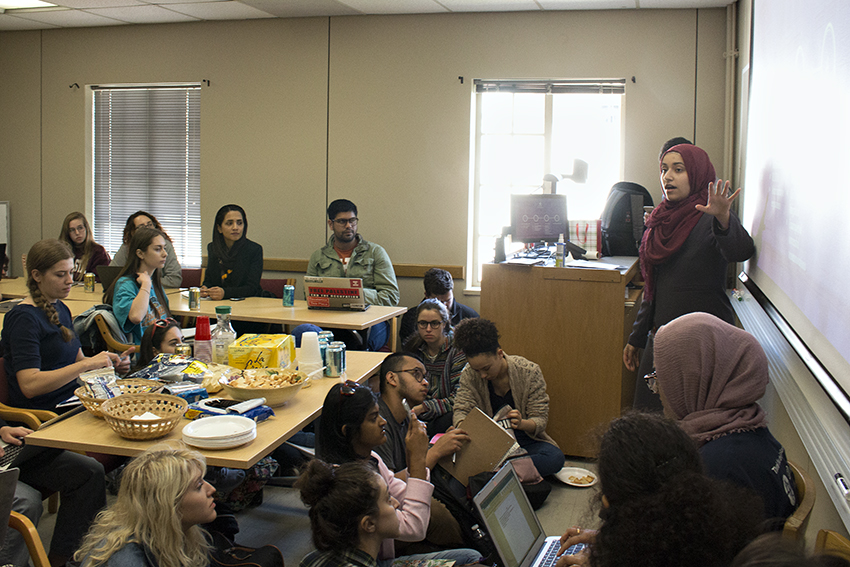 Hijab is the Islamic dress code and is often prohibited in U.S. jails, said Noor Wadi, a juris doctoral candidate, who spoke on the ethical issues surrounding the ban Wednesday.

The talk was part of UT’s Islamic Studies Colloquium, which offers the opportunity for the UT community to discuss research on Islam and the Muslim world.

“Muslim women are not being understood, not being accommodated and are forced to stop wearing Hijab,” Wadi said. “This is close to my heart because of personal attachments, but also because it’s such a hot topic right now.”

A scarf adorned Wadi’s head as she presented to about 50 people who crammed into the small classroom in Calhoun Hall. Wadi presented her research on recent court cases, during which Islamic women were forced to remove their scarves both in the courthouse and in jail.

She said this is not as big an issue for Muslim men, even though Hijab requires them to be covered from the navel to the knee.

“The scarf is referenced interchangeably as the Hijab, but (for women) even if there were accommodations made (in jails) just for the scarf, that wouldn’t be sufficient because all but the face and hands need to be covered,” Wadi said.

Juvariya Lat, computer science junior, is also Muslim, and said this is important for the rights of all people, not just Muslim women.

“As someone who practices Hijab, this topic was really interesting to me,” Lat said. “These issues are important and maybe no one really talks about them because there aren’t many Muslims in America, but I feel it relates to everyone and the right to practice your religion.”

Samy Ayoub is a lecturer in the department of Middle Eastern studies, and coordinated the forum. He said before this initiative, it was hard to organize conversations on Islamic research at the University.

“The problem was people have different corners on campus and this program was able to bring them together to promote more intellectual pollination,” Ayoub said.

Wadi said she thinks this will continue to be a contentious issue, as there is no positive law yet regarding people’s religious wear in jails.

“The law is not settled on this issue,” said Wadi. “A higher court has yet to review the issue of Hijab in jails on the merits, but all the cases show that when the issue is pushed, they find ways to accommodate people.”