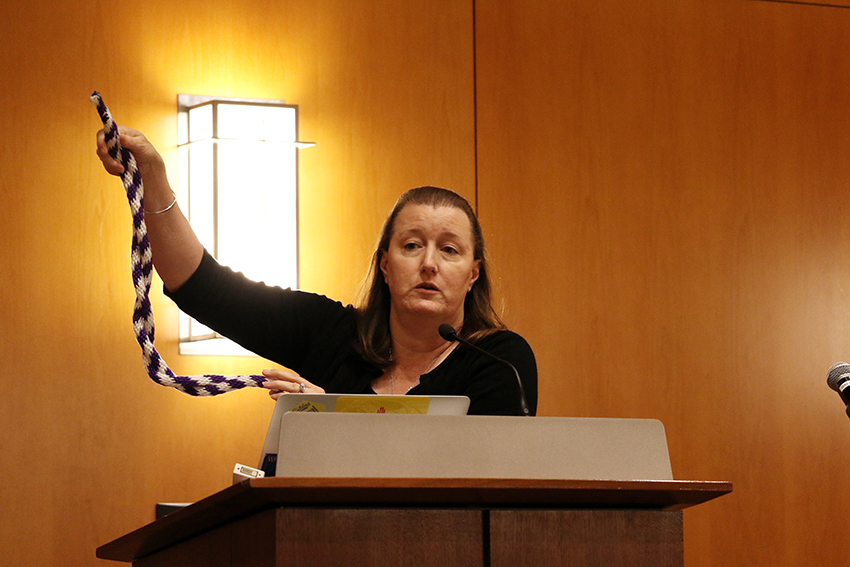 On Wednesday, the UT Polymathic Scholars followed in the tradition of Chautauqua, a 19th-century intellectual movement focused on the intersection between disciplines as varied as science and art, with a series of lectures by UT professors and researchers about the beauty found in science.

Arturo De Lozanne, a molecular biosciences professor, began by showing the microscopic beauty of cellular structures with photographs of cell parts. These photographs were developed through the use of microscopy and computer graphic design to illustrate the elaborate geometric structures of the microbial world.

“What I find most beautiful is the use of these instruments. We can even find beauty in things that make us uncomfortable,” De Lozanne said as he focused the audience’s attention on a high-resolution photo of a virus.

De Lozanne compared the ability for cells to not only divide, but to also maintain the presence of all 23 chromosomes in every division, to “a dance.”

“We are a collection of behaviors of cells,” he said. “When we begin thinking of ourselves in that way, we can gain an appreciation for what we are.”

The next speaker, Josh Roebke, a visiting researcher at the Institute for Historical Studies who studies the history of science, spoke about the obsession that physicists have with the concept of beauty found in mathematics. The desire to find symmetries and unifications of theories, such as the combination of electricity and magnetism, is considered a driving force behind scientists’ understanding of reality.

For example, the Dirac equation, which explains the movement of electrons, led to the prediction of antimatter, a group of particles with an opposite charge to the familiar protons, neutrons and electrons that compose our everyday lives.

“The physicist wants to find the simplest equation that explains the most, and to many, the most beautiful equation is the Dirac equation,” he said.

Astronomy professor Craig Wheeler followed by showing the beauty of the universe with photos and computer-generated renditions of celestial bodies from pristine star-forming gas clusters to Andromeda, the Milky Way galaxy’s closest neighbor.

Building on De Lozanne’s discussion of biology, Wheeler said that the heavy elements that compose the planet and the human body, from the iron in blood to the calcium in bones, were all born from the decomposition of stars.

Textiles and apparel lecturer Luisa Gil Fandino next showed her work on biomimicry, a developing science where designers and researchers look to nature to help improve upon everyday materials.

From developing super adhesive tape with gecko skin to designing dresses with the geometrical patterns of butterfly wings, tricking our vision into seeing colors and eliminating the need for dye, the applications of biomimicry are based on repetitions through knotting and weaving that occur naturally in the animal kingdom, Fandino said.

The night ended with a literal twist: mathematics professor Jennifer Austin, with a rope in hand, delved into knot theory.

Austin said that knot theory, an idea from pure mathematics once thought to have no real-world applications, has now become an important part of her research in understanding the complex geometry of DNA.

To Austin, the complexity of these topological forms was simplified with the use of a rope. She helped the audience visualize how various knots look and the issues that they may cause in the genes, including cell death and genetic rearrangement.

Wheeler concluded the panel with concern over communicating science and its beauty effectively.

“You just can’t describe the beauty and complexity of it all without having the training and a complete understanding of the discipline,” Wheeler said. “You know that it’s important to communicate science, but you know you have to water it down. It’s an important dilemma.”