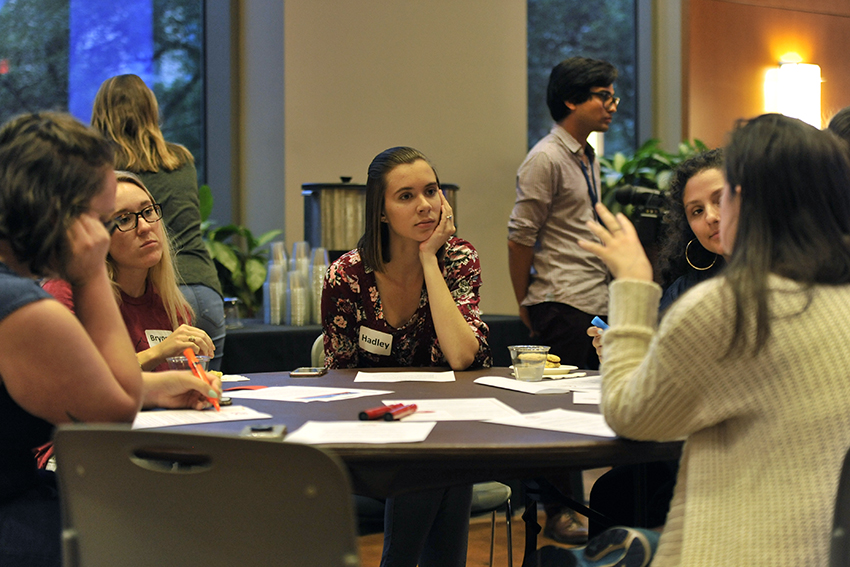 To deal with the aftershock of February’s Parkland, Florida, school shooting, the Talk It Out student dialogue series launched its first event, creating a space for students to have a civil conversation about gun control.

The event, which grouped students together to discuss their thoughts on the causes and emotions surrounding mass shootings and gun violence, was conducted by students in two different classes under the Bridging Disciplines program, both headed by communication studies professor Madeline Maxwell.

Rita Jhang, a communications studies graduate student, grew up in Taiwan, where private ownership of guns is largely outlawed. She said she participated in the event because she wanted to discuss the issue of gun control with students of different backgrounds.

“I do feel like, because the Second Amendment is very important to Americans, that is one thing I will never understand, the importance of having such a dangerous tool in your possession,” Jhang said. “But I do understand that for some Americans, that can be a big part of their lives or identity.”

Roughly 25 participants were asked to align themselves on a spectrum of comfort with guns and then separated into groups of six to seven people to engage in debate. The organizers attempted to blend a mix of people with different comfort levels in each group.

Andrea Bone, a biochemistry and communications sophomore, said she grew up around guns and hunting and wanted to hear other perspectives on the issue.

“Even though I grew up in that setting, I still have a lot of knowledge and education I need to gain from other people as well,” Bone said. “I just think that just because I grew up in one social setting doesn’t mean I know everything about guns. I don’t have all the knowledge.”

Program coordinator Vicki Read said she had the idea after seeing other universities such as Harvard University and Pennsylvania State University engage in similar events.

“My goal is to just get students talking,” Read said. “For differing sides to really hear each other and not necessarily advocate or protest but to come and really have a discussion about why people feel the way they do. It’s easier to do that face to face with an actual human — rather than online — where you can see each other and say, ‘Oh that really is a person, not just some weird idea I don’t agree with.’”