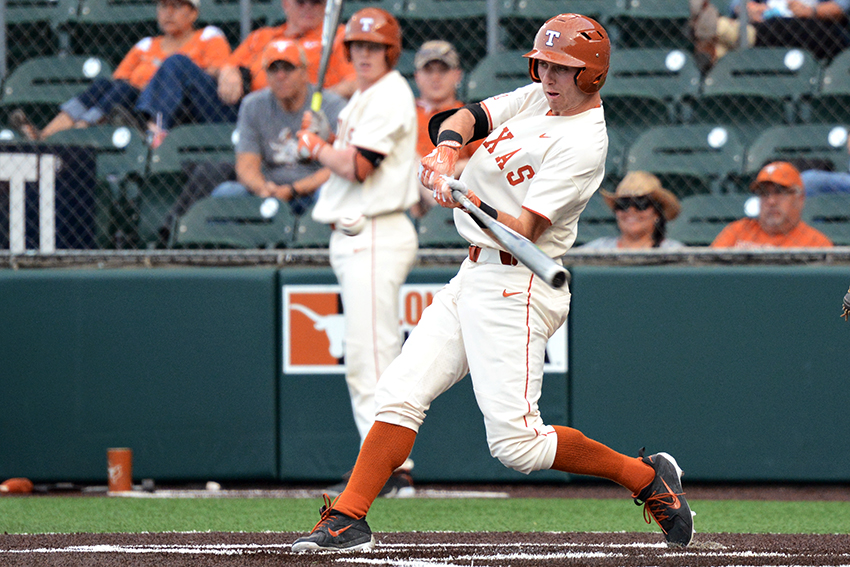 In the second game of the season, junior outfielder Tate Shaw put on a defensive show, frustrating Louisiana-Lafayette hitters with several diving grabs in left field.

After the Feb. 17 contest, when asked about Shaw and the team’s outfielders, sophomore outfielder Austin Todd was quick to brand the Longhorns’ outfield with a new nickname.

“We always say that the outfield is the ‘No Fly Zone,’” Todd said. “There’s nothing that’s going to drop between us. If it does drop, then the guy that hit that just earned it. We’re pretty fast out there.”

While the outfield may be the ‘No Fly Zone,’ all aspects of the Texas defense have looked impenetrable midway through the season. The team ranks first in the Big 12 in fielding percentage and in double plays.

Texas head coach David Pierce has praised the unit as the highlight of the season thus far.

“We’ve been playing great defense,” Pierce said. “We’re fielding .944 in conference and right at .980 overall. Really, really most impressive so far (this season) has been our defense.”

One new addition to the infield, junior Kody Clemens, has shined this season. After playing primarily at designated hitter last year, Clemens has complimented his hitting abilities with new responsibilities as the Texassecond baseman. Clemens has committed just two errors this year and has helped the team turn 28 double plays.

Clemens has further echoed the sentiment of a sound Texas defense.

“We haven’t made that many errors, and when we do, it’s a stupid mistake,” Clemens said. “Everyone is solid all the way around the field. Our outfielders track down balls very well. Our defense is really good.”

While the defense has been a bright spot for the Longhorns, the team’s starting pitching has been volatile this season. In last weekend’s series against Kansas State, starters combined for only 11.1 innings over three contests.

In this weekend’s series against Baylor, the trio of pitchers Nolan Kingham, Chase Shugart and Blair Henley are again scheduled as the Texas starters.

After losing two out three games against Kansas State, Pierce has challenged the three pitchers to step up.

Henley agreed with the blunt assessment provided by his coach. “(Coach Pierce’s) message was that we were awful and we deserved it,” Henley said. “You don’t learn if (your coach) isn’t blunt. We go a game at a time, and take it pitch-by-pitch. We’re going to do what we can.”

With a strong defense behind them, the Texas pitchers will have to step up this weekend against Baylor. Game one of the series is scheduled for 6:30 p.m. on Friday at UFCU Disch-Falk Field.