UT social media influencers explain why they share their lives 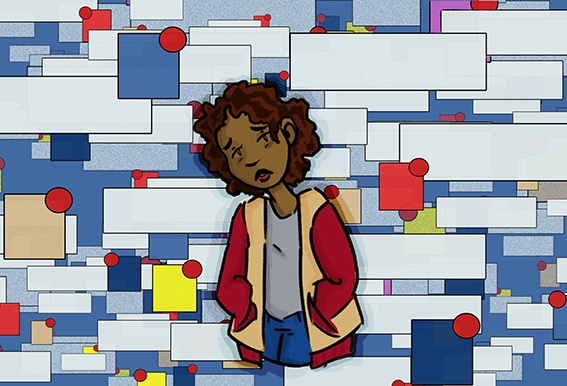 What starts here changes the world, and sometimes the internet. Social media is often flocked with viral posts and popular profiles owned by regular people. These three UT students use their online popularity as tools to promote messages of positivity, motivation and inclusion.

Radio-television-film freshman Dawn Smith is a makeup artist who uses YouTube, Instagram and Twitter to share creative styles. Smith said she wasn’t surprised when she went viral on Twitter in February after a user used her photos to make jokes about her weight.

“That wasn’t my first time going viral,” Smith said. “The first time was just as bad, but I didn’t really pay attention to any of the negative stuff because it just didn’t matter to me. If I walked around sad about everything people said about me, I’d be sad 24/7 because someone will always have something to say, especially on Twitter.”

Smith got into makeup during high school and has since started using her social media and YouTube accounts to promote unconventional beauty and style.

Smith, a self proclaimed makeup guru, said she experienced bullying because of her weight since childhood.

“When I was younger, I dealt with a lot of people talking about me a lot and back then it was overwhelming,” Smith said. “Back then I would get discouraged and as time passed, I grew my confidence and once I did that, nobody could tell me anything.”

“I’ve been doing makeup on my channel for a little over a year,” Smith said. “Loving yourself and being confident takes time, it’s a process. It wasn’t easy for me. But once you get there, it feels so good.”

Ariea Bastami had an eventful start to his time at UT. A transfer student from the University of Texas at Dallas, Bastami started sharing rap videos about his love of sports on Twitter. Bastami said his Twitter raps got attention from a few Texas athletes, which landed him in the UT football facility with Tom Herman.

“We went to his office and (Herman) asked, ‘Hey, is there any way you can do a rap by tomorrow to this beat you’ve never heard before over 27 signees?’” Bastami said. “In my mind, I was like there is absolutely no way I can do this because I had like three assignments due on Canvas the next day. I look Tom Herman in the eyes and I go, ‘Tom, absolutely.’”

Bastami said he spent five hours listening to the beat, studying the players and writing.

“I watched film to see their nuances, what they do on the field,” Bastami said. “I just listened to the beat on a continuous loop and wrote until I got something done, and we shot it the next day.”

Since then, Bastami said his online popularity has soared among Longhorn fans. He continues to tweet new videos, but not always about sports.

“A lot of it is interpersonal stuff, and that’s what rap is about,” Bastami said. “I want people to know that if I can do this — if I can be successful making rap videos, get in better shape, get to my dream school, whatever it is — then you sure as hell can do it, too.”

Jessika Wysinger, human development and family science senior, had a peculiar reason for starting her YouTube channel back in 2009.

“One real reason I started my channel was because my ex-boyfriend called me ugly, and at the time I was really upset about it,” Wysinger said. “I turned to makeup and stuff to try to make myself feel nice and feel pretty.”

Wysinger said she dedicated her channel to women like herself who may struggle with accepting their appearance.

“Once I made that epiphany within myself, I made sure to promote on my channel that even though we love makeup and we love hair and fashion, it doesn’t make us,” Wysinger said. “This is just something that we can play in and do for fun.”

With more than 100,000 views on her YouTube videos, Wysinger said her channel has grown in popularity over the years.

“Back then, makeup (content) wasn’t as big as it is now,” Wysinger said. “I was really just trying to push away this stigma that makeup, wigs, or weaves are used to cover up and try to fix things. It can just be fun to change up your look from time to time but not a necessity.”