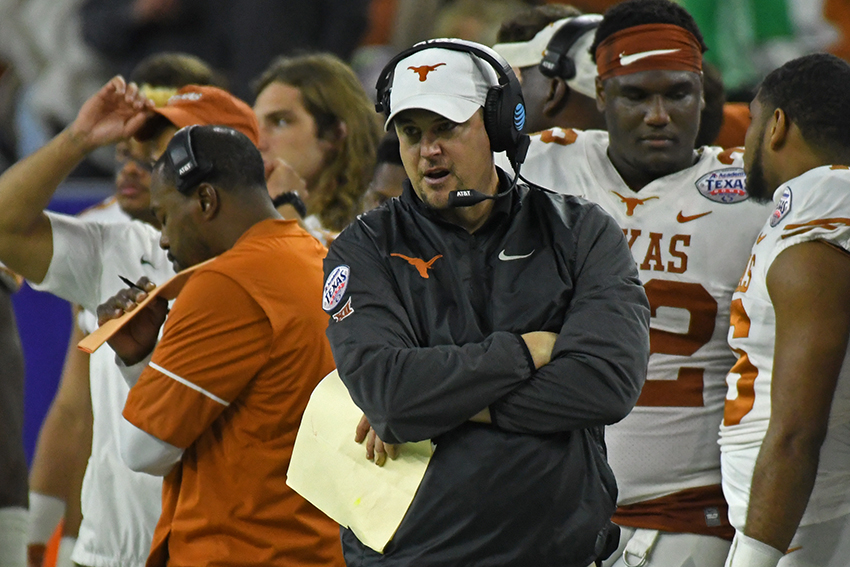 Every spring practice starts the same way — not at the coach’s whistle, but at the cue of blaring music around the Frank Denius Fields.

But at the onset of Tuesday’s practice, an abnormal silence settled around the field. Instead of thumping bass, the din of clashing shoulder pads and vocal coaches and players echoed throughout.

“Sometimes silence can be distracting when you’re used to chaos and noise,” Herman said. “I wanted guys to bring their own energy level … probably most importantly, I wanted to hear guys communicate.”

During the past three weeks of spring football, Herman and his coaching staff have preached effort in all aspects of the game. Now a little under two weeks out from the spring game, execution is next on the laundry list.

Saturday’s scrimmage pitted both units against each other, bringing out the competitive nature and challenging each side to execute. Much to Herman’s satisfaction, each unit had its moments.

“Both sides of the ball are having some success,” Herman said. “As long as it’s balanced, I think we’re headed in the right direction. It certainly appears that way now.”

On the offensive side of the ball, the Longhorns are continuing to look for ways to utilize their reloaded wide receiver core.

With a long list of receivers on the depth chart, including sophomore Lil’Jordan Humphrey and freshman Brennan Eagles, Texas will focus a lot of its time on finding personnel for its slot position and three-wide-receiver sets.

The Longhorns’ offensive struggles over the past two seasons have been attributed in part to inconsistent wide receiver play, and that’s something offensive coordinator Tim Beck wants to nail down this spring.

“I think that the guys that are here are getting better,” Beck said. “It’s us coaching them. We know these guys a little bit more.”

One of Texas’ main struggles this spring has been in the backfield, as a slew of fumbles in recent weeks prompted Herman to have open tryouts for the position. The losses of juniors Kyle Porter, Tristian Houston and Kirk Johnson to injury have forced sophomores Toneil Carter and Daniel Young to carry the load.

More importantly, addressing the running back position will take pressure off Texas’ quarterbacks. Sophomore quarterback Sam Ehlinger led the Longhorns in rushing yards last season, mostly due to an inconsistent running game. As a result, Texas has made the ground game a top priority this spring.

“I think the first thing we said was that we’ve got to run the football better,” Beck said. “It takes some pressure and stress off (the quarterbacks) to have to feel like they have to make all the throws, all the plays, all the time.”

Despite the Longhorns’ growing pains on offense, Herman and his staff have seen a more important development in their players from year one to two: buying in.

During the first half-hour of practice, there’s a noticeable amount of players taking charge and coaching their teammates on effort and technique. This type of leadership helps increase accountability among players, and lets coaches do their job: coach and develop.

“There’s a lot less coaching of culture and effort, or demanding of that,” Herman said. “The guys understand the expectations of practice which allows us to develop our new guys … we’re well ahead of where we were.”