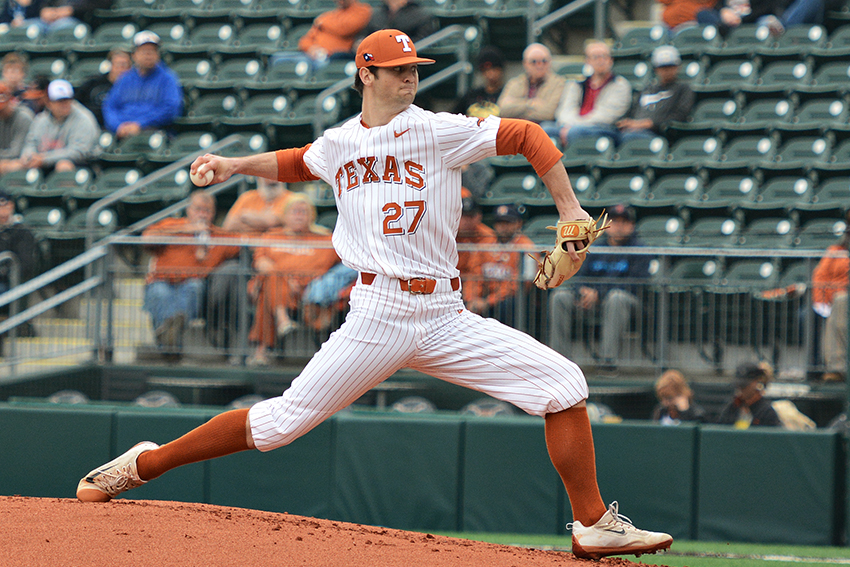 While the name Blue Bell Park may fill your mind with images of sweet soft serve, the result the Longhorns came away with Tuesday night wasn’t served so softly.

The bubbles were flying and chants of hostility frequently rang down on the Texas Longhorns in College Station as they took on the rival No. 22 Texas A&M Aggies on Tuesday night at Olsen Field at Blue Bell Park. The Aggies took an early four-run lead in the bottom of the first and never looked back as they prevailed against the Longhorns, 6-5.

Texas’ starting pitcher, freshman Nico O’Donnell, didn’t last very long in the game. After letting up two runs with only one out in the first, he was pulled in favor of freshman Kamron Fields. Fields’ day didn’t fare much better, as he surrendered two more in the first inning. He pitched two more innings before being replaced by junior Matteo Bocchi.

The Italian-born Bocchi finally received help from the Texas offense in the top of the fifth inning as junior infielder Kody Clemens led off the scoring with a two-out double to left field to bring in two runs. Redshirt freshman designated hitter Zach Zubia would not be outdone, as he followed up Clemens with an RBI single of his own.

Redshirt junior reliever Parker Joe Robinson had a short stint on the mound before being replaced by freshman reliever Bryce Elder. Elder struggled to find the strike zone and was shelled by the Aggies for two more runs. Elder came off the mound before finishing the inning in favor of redshirt junior Josh Sawyer. Sawyer did his best to limit the damage and held the Aggies scoreless for the rest of the sixth inning.

The Longhorn bats finally returned on the shoulders of Clemens, whose single ignited another scoring drive for Texas. After he found a way on, a Zubia walk and a sacrifice bunt by sophomore infielder Ryan Reynolds brought in Clemens.

Redshirt junior Andy McGuire took to the mound and shut out the Aggies the rest of the game.

Texas’ offense, meanwhile, made a late charge in the eighth inning with another clutch hit from Clemens, who hit an RBI single to bring the lead within one. Zubia and sophomore David Hamilton both got on to load the bases with two outs. Down by one with the bases juiced, Reynolds grounded out to end the inning.

Texas failed to make anything happen in the ninth and lost by one to the Aggies in front of the latter’s rowdy home crowd. Texas moved to 22–13 on the year and has now lost five of six games to SEC opponents over the course of the year.

The two teams played their 369th game against each other and continued a rivalry that has fallen by the wayside since Texas A&M’s relocation to the SEC. Texas currently holds the lead in the rivalry at 238–126–5.

Texas will try to shake off the loss as it faces another looming rival — the Oklahoma Sooners — this weekend in Norman, Oklahoma, for a three-game series. First pitch Friday is scheduled for 6:30 p.m. at L. Dale Mitchell Baseball Park.