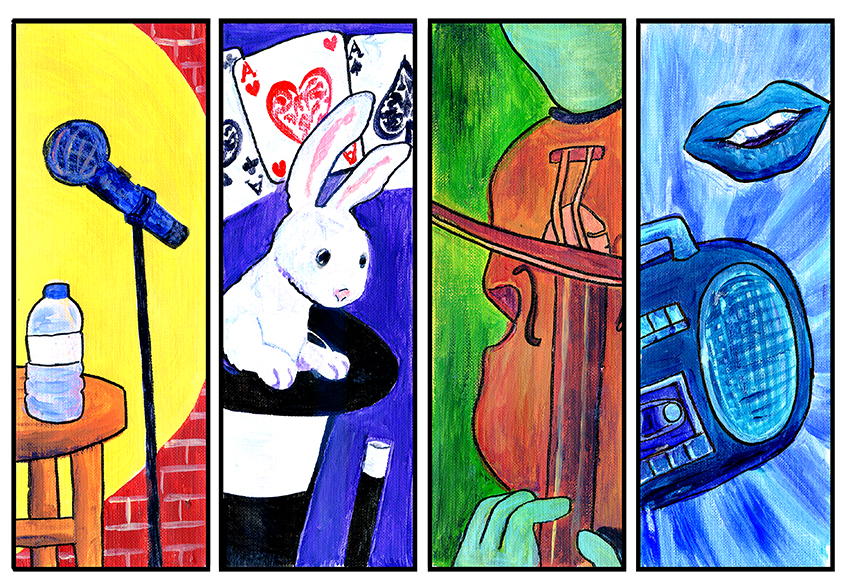 This Saturday, UT students will perform the show of their life, competing for a $1,500 grand prize.

Campus Events + Entertainment will present the annual Texas Revue, a “Burlesque-themed” talent show, showcasing the abilities of students campuswide. After hours of rehearsal and preparation, a diverse selection of 10 acts will show off skills in a collage of wide-ranging talents.

Religious studies junior Giancarlo Bernini will appear on stage as a magician. Bernini said magic is something he’s loved since he was a child, and he expects to pursue it full time post-graduation.

“I’ve always really liked magic,” Bernini said. “When I was a kid, I would always watch that Disney movie ‘Fantasia,’ especially that scene where Mickey would put on the hat and make all the broomsticks dance. I would just watch that scene over and over.”

Bernini said he doesn’t perform magic simply to wow audiences, though. Instead, Bernini feels that a beautifully performed trick has the power to impact a person, and that’s what he aims for in every show.

“It’s not so much the thrill of doing the card trick as it is having that interaction with someone,” Bernini said. “If it’s done beautifully, then it’s going to resonate with their soul and be more impactful for the person.”

Nolan Tucker, cell and molecular biology junior, is another performer in this year’s Texas Revue. A violinist of eight years, Tucker said he was invited to perform at the show after uploading a video of him performing a song on the popular campus meme page UT LONGmemes for HORNSy Teens. Contrary to his fellow performers, Tucker claimed audiences should expect his act to be fairly direct — he said he’s just going to play a song.

Tucker says that despite popular belief, one doesn’t need to practice hours every day in order to maintain their skills of playing violin. In fact, Tucker says he plays an average of only one hour per week.

“People think that playing the violin is just like piano in that you have to practice two hours every day,” Tucker said. “With classes, I study less. I’m not a music major or anything, but I still like to get better.”

Hayes Reed, advertising and radio-television-film junior, also aspires to have a transformative effect on his audience by educating listeners on the potential of beatboxing. After discovering the beatboxing world at 15, he said he turned his repertoire of sounds into acts he’s performed around campus and at popular spots downtown.

“I think it’s an underrated art form,” Reed said. “You can actually make full sounds with your mouth, and you can make music that people want to listen to.”

Reed said there’s a misconception when it comes to beatboxing, that it’s not just a string of different sounds but something that is structured similarly to today’s music.

“You have to have structure,” Reed said. “You need a bridge, chorus and end. At the end of the day, you make stuff that people want to listen to.”