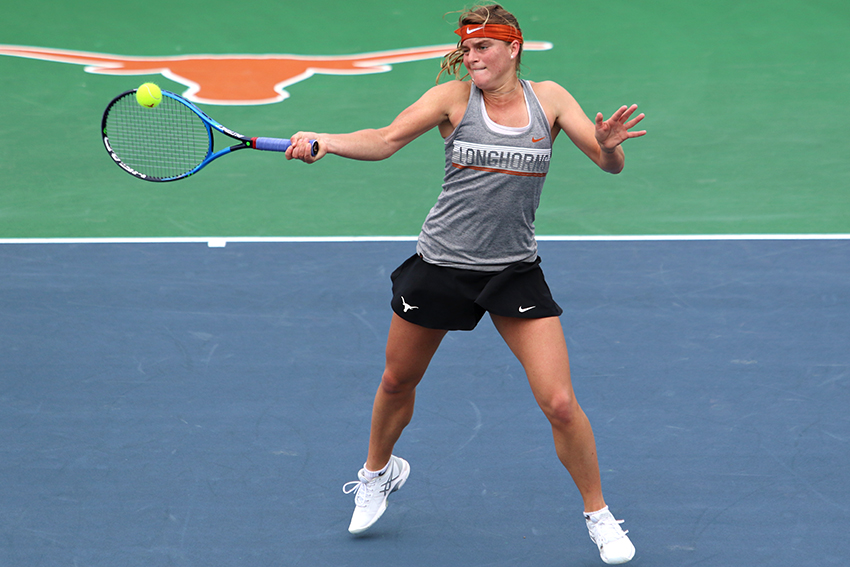 The Longhorn women look to extend their 11-match win streak this weekend as they prepare to face Big 12 foes Iowa State and West Virginia.

Texas (16–4, 6–0 Big 12) moved up a single spot to No. 5 this week after the Intercollegiate Tennis Association released their most updated rankings this week. After a thrashing of TCU, which endured multiple delays, and a dominant performance over No. 15 Texas Tech last weekend, Texas holds the top spot in the Big 12 Conference.

“A 35-minute lightning delay followed by a rain delay and then a move indoors at the critical moment of the doubles unquestionably made for a late and interesting evening,” Texas head coach Howard Joffe said. “We will need to play better tennis moving forward, but the Longhorns did display some psychological mettle.”

Earlier this week, the Big 12 announced Texas sophomore Petra Granic as the Big 12 Women’s Tennis Player of the Week, marking the second time Granic has received the honor within a month and the fifth time a Longhorn has been selected this season.

Granic extended her singles win streak to nine games last week after her winning performance against No. 15 Texas Tech.

Texas star sophomore Bianca Turati maintained her No. 1 spot in the ITA national singles rankings, a spot she’s held since March 6. Turati’s twin sister, Anna, moved up a single spot to No. 27 in the nation, while Granic ranks No. 75 in singles and No. 45 in doubles with freshman Bojana Markovic.

A big weekend is impending for the Longhorns as they continue Big 12 play with two matches.

The men’s team will look to avenge its loss last week to TCU. The Longhorns couldn’t quite handle the No. 10 Horned Frogs, falling 4-2. It was Texas’ first match in conference play.

Despite the loss to TCU, Texas head coach Michael Center was encouraged about the direction his team was headed going into the rest of conference play.

“I’m walking out of here feeling really proud of the guys and proud of their effort,” Center said. “If we can just keep building on what we did today, we’re going to be just fine.”

This weekend features matches on Friday and Sunday against Oklahoma State and Oklahoma, respectively. They are the Longhorns’ last two home regular season matches, and they don’t play at home again until they host the Big 12 Championships, which begin on April 27. Texas’ last two regular season conference matches are next weekend at Texas Tech and at Baylor.

The Cowboys are riding high after last weekend when they swept Texas Tech and beat Baylor in a close 4-3 match.

Oklahoma also had a successful first weekend of conference play. The Sooners took down Baylor on Friday, 4-2, followed by a victory over Texas Tech, 4-1, on Sunday. Oklahoma currently holds the No. 14 spot in the nation. The Longhorns will be seeking revenge after last year’s 4-3 loss to the Sooners in the quarterfinals of the Big 12 Championships.