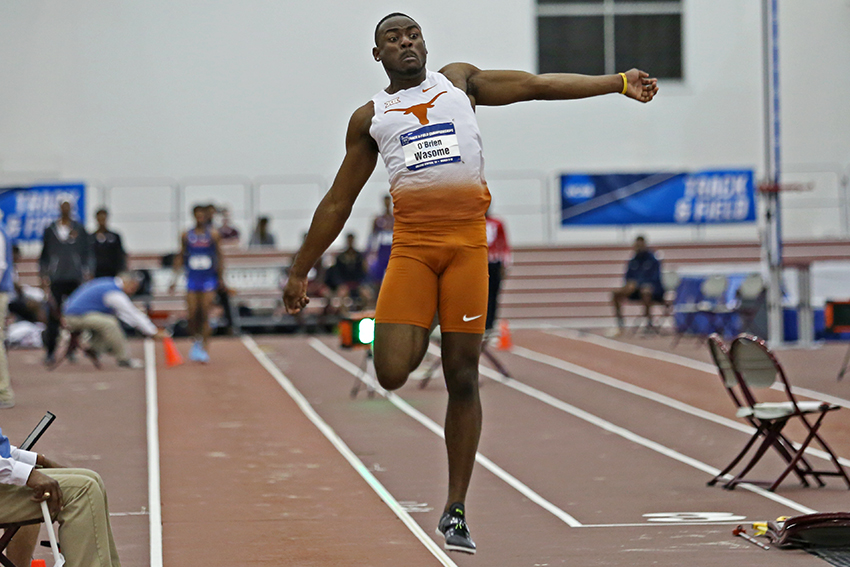 But this weekend, the group takes on a different task. Dropping down to the 400-meter and 800-meter runs, the distance running group will look to continue its success in the middle distance and sprinting events.

“It gives them something different to do,” interim head coach Tonja Buford-Bailey said. “It gives them a mark of where they are (with their sprints). It’s kind of interesting to see, to bring a different aspect to it and have a little fun with it.”

After not sending any athletes to competition last weekend, the team is primed and ready to go as the outdoor season heads into full swing with this meet.

Indoor triple jump national champion O’Brien Wasome began his outdoor season by finishing tenth at Texas Relays, failing to qualify for the final after struggling with some injuries. Wasome and the rest of the jumpers will take another week off to fully recover before beginning to look for qualifying marks.

“He’s a little banged up,” Buford-Bailey said. “Some old injuries, some old things from high school that were bugging him a lot last year, so we’re trying to get a lot of that cleaned up right now.”

With the Big 12 Championship meet looming just a month away, there is still an opportunity for qualifying times to be posted as the season picks up. For now, the team is looking to fine tune, technically and physically.

“It was actually good that we didn’t have a meet last week,” interim head coach Tonja-Buford-Bailey said. “We were able to train through last week (and) do some fine tuning because we have another big weekend coming up.”

Buford-Bailey, however, still has expectations for this upcoming weekend.

“I want to see 400s,” Buford-Bailey said. “I know it will be a bit windy out here, but 400s is still a rhythm event. It’s good to get Zola Golden and Micaiah Harris out in practice just to get a feel for the race.”

Along with Golden and Harris, eyes will be on junior distance runner Meghan Lloyd to see how she bounces back after Texas Relays.

Lloyd, who came in second during the 3,000-meter steeplechase at the Texas Relays, will be competing in full force. She will try to finish the race in the winner’s circle this time around. Her distance coach, Brad Herbster, feels the same way — not only this weekend but moving forward in the season.

“She ran 18 seconds faster and battling against the wind, that’s all you can ask for,” Herbster said. “There’s some things we can do (to improve). She can make nationals running the way she’s running right now.”

Other women to watch for are senior Elena Bruckner, who is coming off a school record, and sophomore Rushelle Burton, who will be trying to continue the momentum from her win at the Texas Relays.