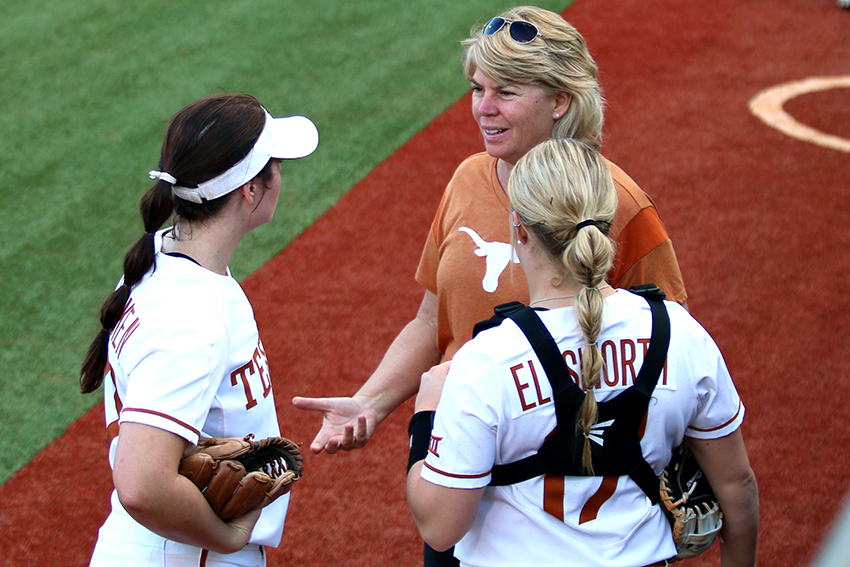 The weather was the exact opposite of last weekend’s series, but that did not change the result. The Longhorns beat Texas Tech, 5-2, Friday night in warm and muggy conditions, much different from last week’s wind and cold.

“We had a great practice yesterday, and I thought we brought that right into today,” Texas head coach Connie Clark said. “Texas Tech’s always been a scrappy team.”

Texas once again jumped out to an early lead, scoring four runs in the bottom of the first. Sophomore Kaitlyn Washington doubled in two runners to score the first runs of the game. She was followed by Sophomore Malory Schattle, who roped a double to drive in two more runs.

But Texas Tech came back to trim the deficit to two runs in the top of the third on a two-run double. While the sudden jolt of offense gave Texas a slight scare, junior captain Bekah Alcozer knocked in an insurance run in the bottom of the fifth to seal the win.

Texas Tech refused to go out without scoring at least one run against junior ace Brooke Bolinger, as she gave up both runs in a single inning.

“I think they’ve been shutout just twice this year,” Clark said. “I know they don’t get shutout a lot. They’ll play you hard the entire game.”

Bolinger collected her 10th win of the season as she continued to establish herself on the mound. She struck out eight and pitched a complete game, her fifth of the season.

Bolinger has already eclipsed her win total, strikeout total and innings total from last season. Needless to say, her adjustment after transferring from Nevada has been completed.

“I thought Brooke got better as the game went on, and she and Taylor found a little different way to set people up,” Clark said. “Their hitters had at-bats all over the place.”

Friday also featured a strong defensive performance from Texas, as the infield stepped up to protect the Longhorns’ lead. Sophomore Kaitlyn Slack had a strong performance all night at shortstop, while freshman MK Tedder made a tough out on a chopper to third with Texas Tech mounting a rally.

Texas’ defense has been the one part of the team’s game that has yet to develop alongside the solid pitching and vastly improved offense.

“I can’t go without saying Slack made some big plays,” Clark said. “Really solid defense for us tonight. We needed every bit of it.”

The Longhorns play Texas Tech on Saturday and will go for their fourth consecutive series victory. First pitch is 1 p.m. at McCombs Field.