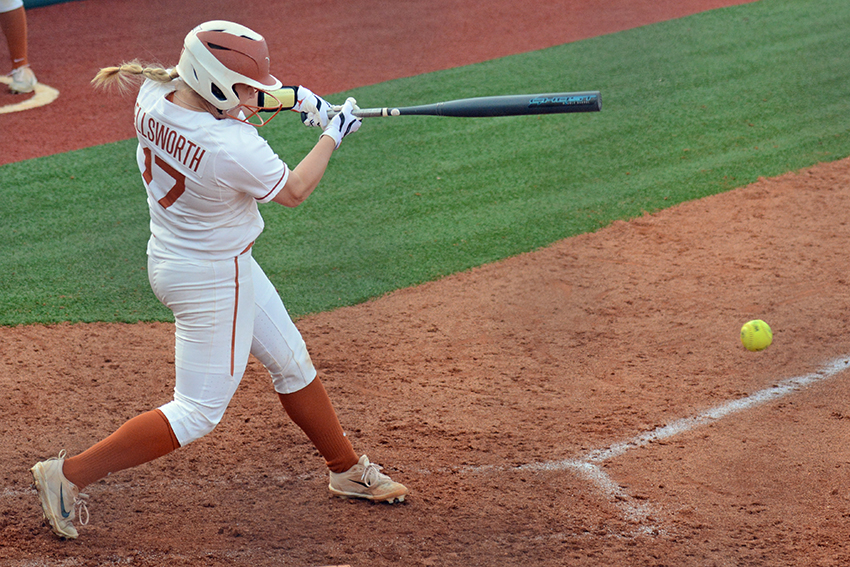 Shortly after her team’s three-game sweep of Texas Tech, Texas head coach Connie Clark delivered a quick, optimistic refrain regarding whether or not her team is prepared for its brutal upcoming schedule.

The Longhorns (26–15, 9–0 Big 12) have been exceptional nine games into their conference slate, defeating their opponents by an average margin of five runs.

Now Texas will need to show it can carry its hot start into the toughest part of its regular season schedule. This week should provide an indication to that question, as two of the top four teams in the Big 12 — No. 16 Baylor and Oklahoma State — come to Austin over the course of four games.

While the Longhorns understand the competition will surely escalate in the coming days, that hasn’t stopped players from feeling confident about their ability to compete with the conference’s elite teams.

“We’ve thought we’re one of the best Big 12 teams from the start,” sophomore catcher Taylor Ellsworth said. “We’ve had a tough schedule in the beginning, and that just prepared us more for the Big 12, and we’re ready to take on any team that comes out here.”

That confidence comes as a welcome sign for a ball club who started the year off very inconsistent, going 12–13 in its first 25 games. Since then, the Longhorns have won 14 of their last 16.

Clark said her team’s recent success and elevated morale makes it the perfect opportunity for Texas to go toe-to-toe with two of the Big 12’s top teams this week.

“You’re seeing some lights come on in terms of what we want to see come out in a championship-minded club,” Clark said. “With some tough competition coming in, our confidence is right where it needs to be.”

One of those areas where the Longhorns have seen increasingly positive outcomes is at the plate, an area in which they immensely struggled earlier in the year. Since starting Big 12 play, Texas ranks second in the conference in team hitting, trailing only No. 2 Oklahoma in that category.

If the Longhorns can continue that success at the plate, coupled with their already formidable rotation, then they could emerge as one of the conference’s best teams.

For now, Texas must handle the task at hand. With a talented Baylor team arriving in Austin on Tuesday night, the Longhorns will face one of their most competitive opponents over the past few weeks.

“We’re taking it one game at a time and each series,” senior pitcher Erica Wright said. “We expect a competitive game against Baylor because they’re
always scrappy.”