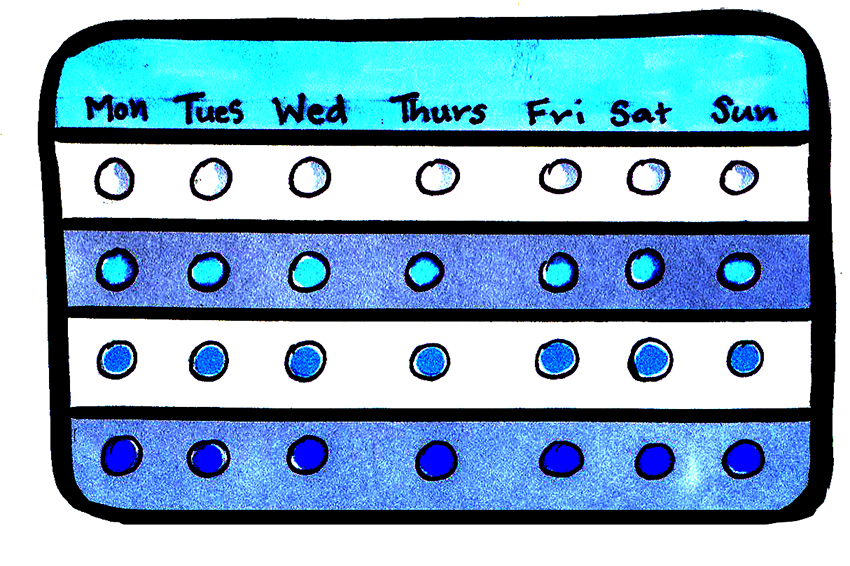 Female college students do not want a painful or irregular period to complicate their lives, and they don’t want to risk pregnancy if they choose to be sexually active.

To combat both the issue of menstrual stability and pregnancy prevention, the most common solution for women is to hit two birds with one stone and take hormonal birth control pills. But is it worth the trade-off of mood swings that lead to crying episodes in the car on the way to work or not feeling like yourself?

Kurian said she began taking the pill to regulate her menstrual cycle. Her doctor told her that mood swings are a common side effect, but she did not feel prepared for what she experienced.

“It ruined my life,” Kurian said. “For, like, two weeks, I was pretty severely depressed. … My doctor said that those side effects that I was experiencing were not supposed to happen.”

Kurian said she had crying spells that were out of character for her and found herself unable to regulate her emotions.

“One tiny thing that someone said would set me off, and I was really upset (all the time) and couldn’t handle it,” Kurian said. “I would ask myself, ‘Why are you crying? You don’t need to cry,’ but I couldn’t stop.”

Kurian said her doctor adequately warned her of common side effects but could not have prepared her for the severe depression that she was going to experience.

“I don’t think she realized or could have predicted that I was going to have the experience that I had,” Kurian said. “Every woman’s body is different and takes these things differently.”

Electrical engineering sophomore Isabelle Rogers’ experience with the pill was not as short-lived, nor did she have a rapid emotional reaction the way Kurian did when she began the pill. Rogers said she experienced mental health problems that she believes weren’t caused by birth control, but further exacerbated by it.

“I had symptoms (of depression and anxiety) in high school before taking birth control,” Rogers said. “I think (birth control) just amplified the symptoms. One time, I was downtown with my boyfriend and friends … and all of a sudden I started crying.”

When Rogers’ friends and boyfriend asked her what was wrong, as nothing provoked her to cry, she said she didn’t know.

“I said, ‘I have no idea, I don’t know why I’m crying I just can’t stop,’” Rogers said. “It intensified the symptoms to where I didn’t feel like myself anymore.”

Both Rogers and Kurian said they felt their experiences do not reflect the most common experience women have on the pill. Currently, Kurian has stopped taking the pill altogether to avoid any emotional or mental health issues.

“I haven’t (tried birth control again),” Kurian said. “I’m very hesitant to try other pills … I don’t really want that to happen to me again. It took me a while to get over that.”

Rogers switched medications instead of stopping the pill altogether, but she is still searching for a better option.

“There are different brands based on different needs,” Rogers said. “I’m still on the lookout for what will work best for me.”

Kurian said she would warn other women about trying the pill if their family members had negative experiences with it.

“I remember my doctor saying that people with the same background tend to have similar experiences,” Kurian said. “I have thought about going on it again, but that experience was kind of scarring.”