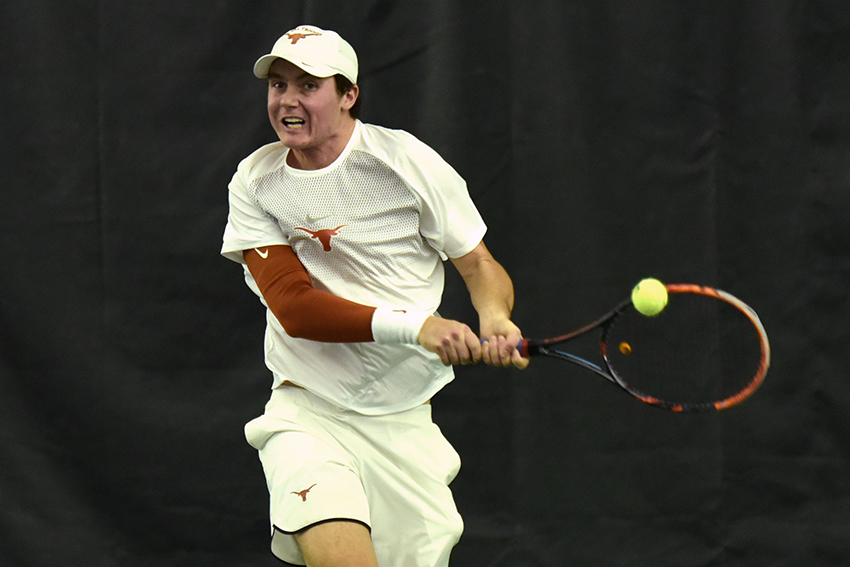 Despite a tough start to the weekend for the No. 15 Longhorns, the men’s team finished strong on Sunday to clinch a first-round bye in the Big 12 Championships.

The men’s team started the weekend off with a hard-fought 4-3 loss to No. 32 Texas Tech on Thursday. The Longhorns could not capitalize on an early lead in the doubles pool and ultimately dropped the doubles point to fall behind 1-0.

With the score eventually knotted at 3-3, the deciding match took place at fourth singles. No. 97 Rodrigo Banzer took the first set over Texas Tech’s Ilgiz Valiev in a tiebreaker, 7-2. But Valiev found his rhythm and proceeded to dominate the rest of the match, winning the next two sets 6-2, 6-0 to clinch the match and give the Red Raiders a 4-3 win.

On Sunday, the Longhorns concluded their regular season with a 4-0 win against No. 23 Baylor. The Longhorns took the doubles point, in large part thanks to an impressive win by sophomore Christian Sigsgaard and junior Harrison Scott at the first position with a 6-2 win over Baylor’s duo of Johannes Schretter and Will Little, which currently ranks ninth in the country in doubles. Singles matches were won by Sigsgaard, Scott and junior Adrian Ortiz. Ortiz has now won seven straight matches and is 11-2 in dual match play.

With the win, the Longhorns now have a first-round bye at this week’s Big 12 Championships, taking place in Austin at the Texas Tennis Center.

“If you lose a match in the Big 12 tournament, you’re done there,” Texas head coach Michael Center said. “And if you lose another, your season is over. That (bye) was something to shoot for, but I just wanted to see us compete well at all nine spots.”

The Longhorns finished the regular season with a 15–6 record. The first match of the Big 12 tournament for the Longhorns will be in the semifinals this Saturday.