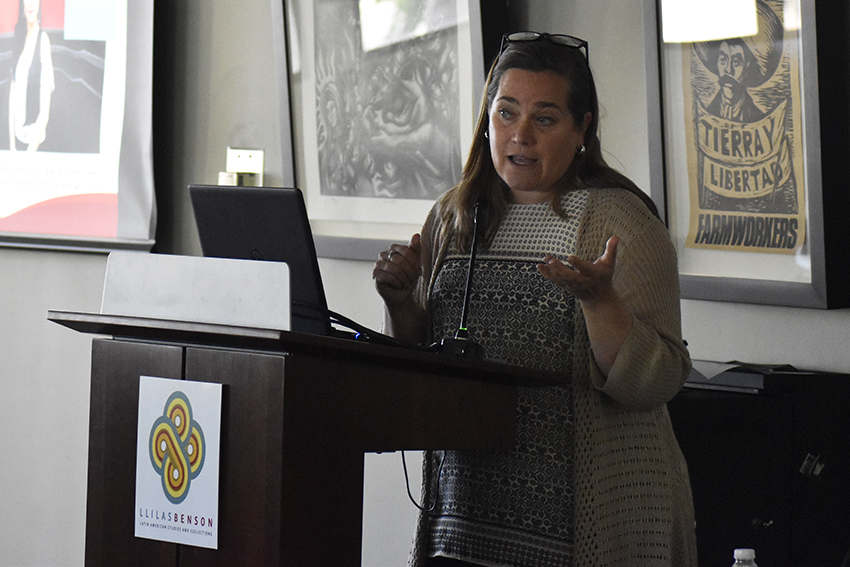 The election of President Donald Trump has brought many controversial policies regarding immigration and deportation, and people who oppose the legislation spoke at a panel on Monday.

The panel, titled “Deported Women Panel: The Plight of Individuals and Families Returning to Mexico,” was held in the Benson Latin American Center and co-sponsored by the Mexico Center and the School of Law’s Latin American Initiative. Four distinguished speakers discussed the nuances and effects of deportation on the emotions of many Latin American immigrants.

With a focus on female immigrants, the speakers discussed the vulnerability that undocumented female immigrants feel in regard to lack of protection by U.S. laws. The Violence Against Women Act, passed in 1994 by former president Bill Clinton, was meant to improve criminal justice regarding domestic violence, rape, dating violence and stalking. However, this piece of legislation does not protect undocumented immigrants.

Denise Gilman, director of the Immigration Clinic at Texas Law, said there’s a certain level of fear felt by undocumented women claiming their rights due to threat of deportation.

“Under the VAWA, many protections are given to a woman, but undocumented women run the risk of being caught and potentially deported even if they were involved in an abusive relationship,” Gilman said.

During the discussion, it also was mentioned that multiple Travis County and surrounding area sheriffs collaborate with Immigration and Customs Enforcement to deport undocumented citizens every day.

Gretchen Kuhner, director of the Institute for Women in Migration, said this is putting a psychological strain on the children of many undocumented immigrants.

“In the minds of the children who are too young to know about deportation, thoughts of abandonment such as, ‘Why did you leave me?’ and, ‘Why did you forget about me?’ become prevalent in their minds,” Kuhner said. “One instance I witnessed was a woman breastfeeding her own child and then being caught by ICE. That was the last time she has seen her baby.”

Sociology professor Nestor Rodriguez said Roberta S. Jacobson, the U.S. Ambassador to Mexico, will be leaving office in May. This gives Trump the power to appoint a new ambassador.

“The U.S. Embassy is working hard to make ICE more personable and reasonable when it comes to deportation,” Kuhner said. “We’ve actually gotten much better, but that all might change when a new appointee gets elected.”