Ghim shares lead after round three at Big 12 Championship 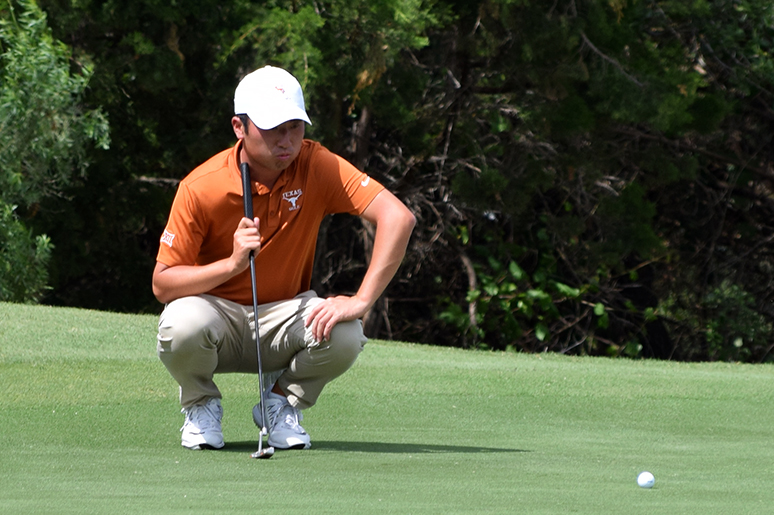 Texas started off strong on day one of the Big 12 Championship at Southern Hills Country Club in Tulsa, Oklahoma, taking the early lead after the first round with a team score of 289. But the Longhorns’ second round of the first day was not as productive, knocking them back to fourth place with a score of 288.

Texas faced a daunting task after sitting eight strokes back heading into the third round on Tuesday. To make a push to claim its sixth straight title, Texas had some work to do.

In the third round, three different Longhorns shot even par or better, making for a solid outing and a much-needed improvement on their first two rounds. As a team, Texas finished with a score of 281 in the third round. The Longhorns sit at 18-over par in a tie with Oklahoma State for third place going into the final day of play.

“I thought the guys played really well today,” Texas head coach John Fields said. “A 281 on this golf course was a solid round for sure.”

As usual, the standout of the round for Texas was star senior Doug Ghim. Ghim followed up rounds of 71 and 69 with a third-round 70 to stay at even par for the tournament. That put Ghim in a tie for first with Oklahoma State’s Grant Hirschman going into the final round.

Senior Scottie Scheffler also finished his third round with a solid performance. Scheffler shot a 1-under par 69 for the Longhorns’ best round of the day. That put Scheffler at 5-over par for the tournament and in a tie for 11th going into the
final round.

Although Texas improved in its third round, the Longhorns still have a lot of ground to make up to catch the leader, Oklahoma, who sits at 12-over par for the tournament. With how the other competitors are playing in the tournament, the Longhorns will need to put up a much lower score than their third-round 281 to mount a comeback.

“Our goal was to have a chance with nine holes to play,” Fields said. “This is a great field, with great coaches and great players. So we don’t take it lightly, and we know we are going to be challenged tomorrow by the weather and the course.”

Texas tees off in the fourth and final round with Oklahoma State at 8:45 a.m. Wednesday.