Students walk the line between using social groups as a community, not a crutch 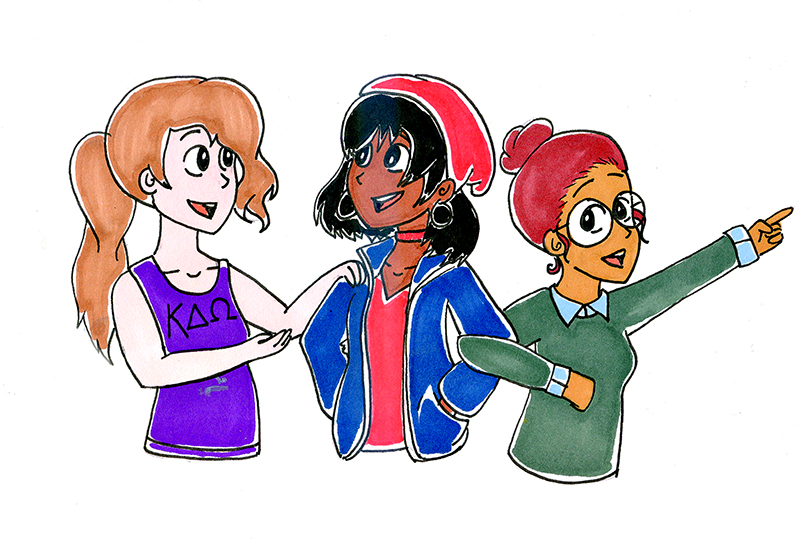 The college experience means something different to everyone, but across the board, it’s usually defined by good times with good people.

Student organizations are a great way to facilitate these kinds of connections, but for many students, there’s a fine line between connection and dependency. Finding a niche to fit into is often high on the to-do list for people who find themselves at a large university such as UT, which is completely natural, according to social work professor Cynthia Franklin.

“Social support, connections and belonging are essential to (the physical) and mental health of college students,” Franklin said. “In fact, students that belong to groups and have friends and social support (networks) have better mental health (and) health outcomes and may find better adjustment in college.”

According to Franklin, the culture within these groups is what defines them as either helpful or harmful to a student’s overall well-being. Franklin said groups that exert intense social pressure on members may negatively impact mental health, and organizations that take it a step further, with competitive culture around behavior such as drinking and drugs, are toxic, or particularly detrimental to a student’s well-being.

“Toxic relations may create situations where students are rejected, bullied or experience social pressures that will negatively impact their college adjustment,” Franklin said.

Plan II freshman Mark Scoros has seen the effects of students leaning on one group too heavily for a sense of identity.

“I try to be involved in multiple groups on campus, but I have some acquaintances within those groups who have let one activity or association substitute for their personality,” Scoros said. “One friend of mine can’t go longer than 30 seconds without talking about wrestling.”

Scoros said this dedication to one organization makes connecting with those not in the group extremely difficult, as those people can be seen as outsiders. Although people can socially function this way, there’s a limited amount by which they can grow and learn from others if they are surrounded only by those like themselves.

One example that has a particularly bad rap for being socially consuming is Greek life. For public relations freshman Alex Phillips, there is a reason for the stereotype, but it doesn’t apply to everyone — sorority and fraternity members can strike a balance between involvement with Greek life and other groups.

“I’ve witnessed people around me using their Greek involvement as their defining characteristic,” Phillips said. “Part of that, especially for new students, is a question of comfort. When you’re in a new place and you don’t have the comfort of old friends, I think people crave that sense of belonging that being all-in on one group can give.”

Phillips’ idea of how best to connect with others mirrors the advice of Franklin. Phillips said that, in her opinion, using one group as a crutch for your identity is something that will be looked back on with regret. Particularly in a city like Austin and at a school like UT, Phillips said there are wide varieties of ways to connect, which shouldn’t be neglected for the sake of committing wholly to one social sphere.