Big 12 Championships Up Next For Longhorns 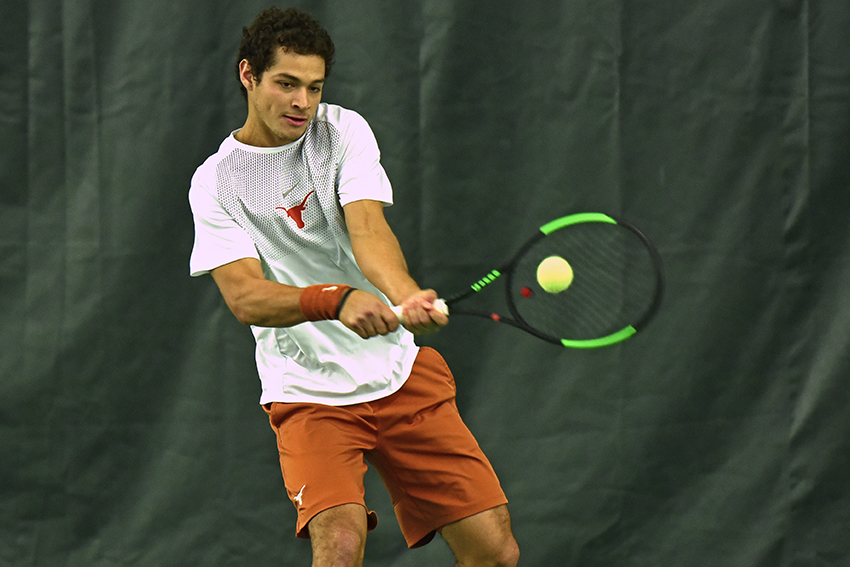 The men’s tennis team had a nice win against Baylor to cap off the regular season as they now head into the Big 12 Championships which is scheduled to begin Friday at the Texas Tennis Center. The win on Sunday against Baylor gives the Longhorns a first round bye, as they are the No. 2 seed in the tournament. Their first matchup of the tournament will be this Saturday in the semifinals.

The Big 12 Championships begin with two matches on Friday. Fourth seeded Oklahoma State is set to take on No. 5 seeded Baylor at 9 a.m. After that, No.3-seeded Oklahoma will take on No. 6-seeded Texas Tech at noon. The Longhorns will play the winner of the latter match on Saturday. Both semifinal matches are scheduled to begin at noon on Saturday and the Big 12 Championships final will take on place on Sunday at 1 p.m. The top seed in the tournament is TCU.

The Longhorns will be looking to avenge a disappointing showing in last year’s Big 12 Championships. They were matched up with their rival Sooners in the first round of last year’s tournament. With home court advantage on their side, Oklahoma was able to edge Texas out, 4-3, and send them packing early. The match came down to a decisive third singles match, where former Longhorn George Goldhoff lost in three sets to Oklahoma’s Alex Ghilea. However, after this year’s win against Oklahoma on April 15, redshirt junior Adrian Ortiz was straightforward in what the goal is for the Longhorns as they go into this tournament, with the NCAA Championships lurking right around the corner.

“We want to take (the Big 12 tournament) all the way,” Ortiz said. “That’d be definitely awesome, and then see how much damage we can do in the NCAA tournament.”

This year, Texas will have home court advantage on their side. While it is certain that the five other teams in the tournament would have loved to have the tournament on their home turf, you won’t see many complaining about getting to play at the new Texas Tennis Center in its first season of use.

“This is, by far, the greatest tennis facility in the country,” Texas athletic director Chris Del Conte said at the opening ceremony of the new stadium in January.

There is currently no rain in the forecast for the entire weekend, so look for all matches to take place at the location and time that is scheduled.