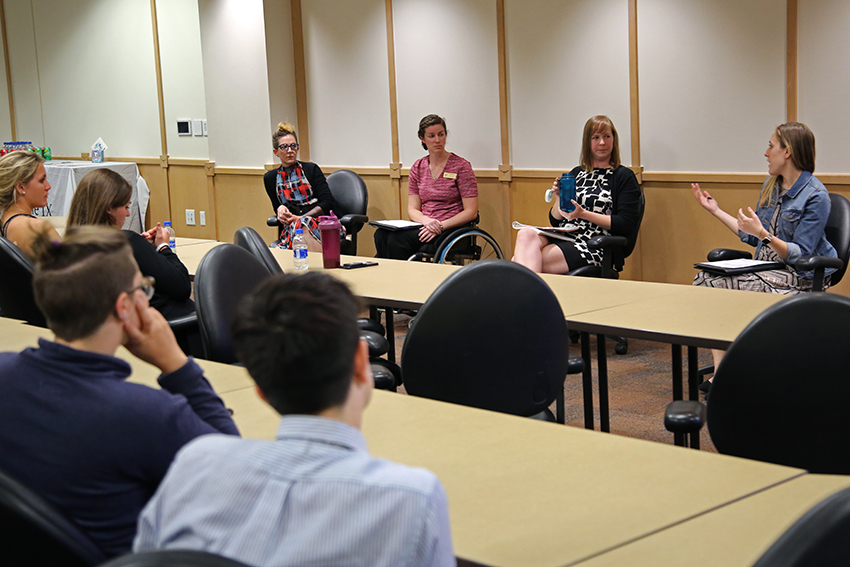 People are quick to assume the needs of people with disabilities without asking them first, which can be damaging when it comes to survivors of sexual assault, said Megan Westmore, SAFE Disability Services’ project coordinator and educator.

Westmore spoke at a workshop Thursday in the Student Services Building, detailing the ways sexual assault survivors with disabilities can be supported on campus. Westmore said it is important to understand that the survivor is the expert of their
own experiences.

“Just because you understand what somebody’s disability label is does not mean you know what their specific support needs are,” Westmore said. “Disabilities look different on different people. So the biggest thing is just being comfortable asking … they know what they can do without assistance, what they might need support with, so you have to be comfortable asking them, ‘What do you need to get through this process?’ or ‘How can I best support you?’”

Westmore referenced an NPR article, which used data provided by the Department of Justice that found people with intellectual disabilities are sexually assaulted at a rate seven times higher than people without disabilities.

Despite the research and data on this issue, people with disabilities are not always included in the conversation about sexual assault, Westmore said.

“When the ‘Time’s Up’ movement came out with their mission statement in the media, they listed out a bunch of groups that are disproportionately affected by sexual assault and they left out people with disabilities,” Westmore said. “They did amend their mission statement, but it just kind of goes to show that this wasn’t even on the radar for most people.”

“There’s sometimes a little bit of a surprise (because) when you think of disability, those aren’t the diagnoses that people automatically think of,” Shryock said. “It definitely includes physical disabilities and sensory disabilities, but also those invisible disabilities that sometimes people don’t connect with the word ‘disability’.”

Nick Winges-Yanez, project coordinator for Texas Center for Disability Studies, said people should create a space for sexuality education for students with disabilities.

“There needs to be more work to recognize that people with disabilities are sexual beings and they have different sexual identities and we need to be advocating for sexuality education happening,” Winges-Yanez said.

The event was hosted by the Title IX office and It’s On Us, a sexual assault prevention organization.

“I thought it would be a great way to talk about survivors who might be facing unique barriers or who have higher rates of victimization and to shine a spotlight on what we can do better as a community to support survivors as well,” said Breall Baccus, Title IX confidential advocate and prevention coordinator and panel facilitator.