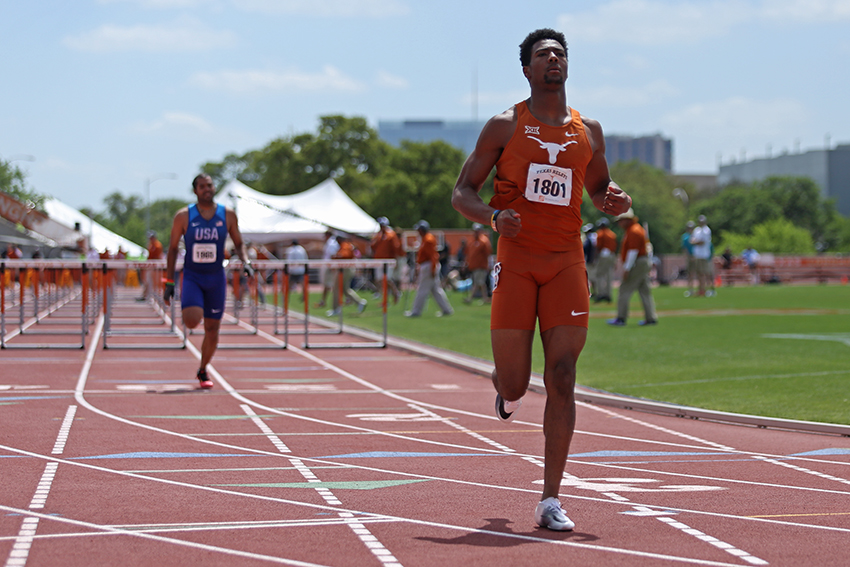 With the Big 12 Championship meet in its sights, the time is now for the Texas men’s track team.

As the entire team travels to the National Relay Championships in Arkansas, some Texas athletes are still looking to post qualifying marks for the regional meet. The urgency to meet these marks this week is more important now than ever with the Big 12 championships up next.

“Personally, the past two or three races I’ve had haven’t been that great,” junior hurdler John Burt said. “I’m looking at this meet to solidify the time that I might get in order to qualify for regionals.”

Like Burt, the rest of the men’s track team will look at this meet as key to ensure a spot prior to the conference championship meet, where a team championship should be the only goal in mind.

“We want Big 12s to not be a qualifying meet,” interim head coach Tonja Buford-Bailey said. “We want it to be (about) the team and points. Outdoor, you want to get yourself on the list for the top 48 in the region that way, you don’t have to worry about it. You can go (to Big 12s) just to help your team win.”

Aside from qualifications, the team is traveling together on a rare away meet. Garnering experience for this young team in a meet of this format is key late in the season.

“It’s great camaraderie, especially going into conference in two weeks,” Buford-Bailey said. “It’s the first time we get to travel together, be in a hotel together, cheer each other on. It’s really important.”

The two-day event begins with the 100-meter hurdles, which has been a strong area for the women’s track and field team this season. Last week sophomore Rushelle Burton won at the LSU Alumni Gold meet. Burton picked a good time to show out and begin hitting her stride.

“Yes, I really think so,” Burton said when asked if she is hitting her stride before the championships. “There are things I have to work on, but I am.”

Just as sure as Burton was in herself, Buford-Bailey felt that better performances are surely on their way.

“I definitely think they are ready to hit another gear,” Buford-Bailey said. “I expect, before the NCAA prelim, them running a personal best.”

The confidence that Burton and Buford-Bailey exude is not new to the team. This is a group that goes into every meet expecting greatness, and this meet does not seem to be any different.

The hurdlers have been a focus of the team this year, and with two of the best in the country running this weekend, it is looking to be a step forward en route to the conference championships.