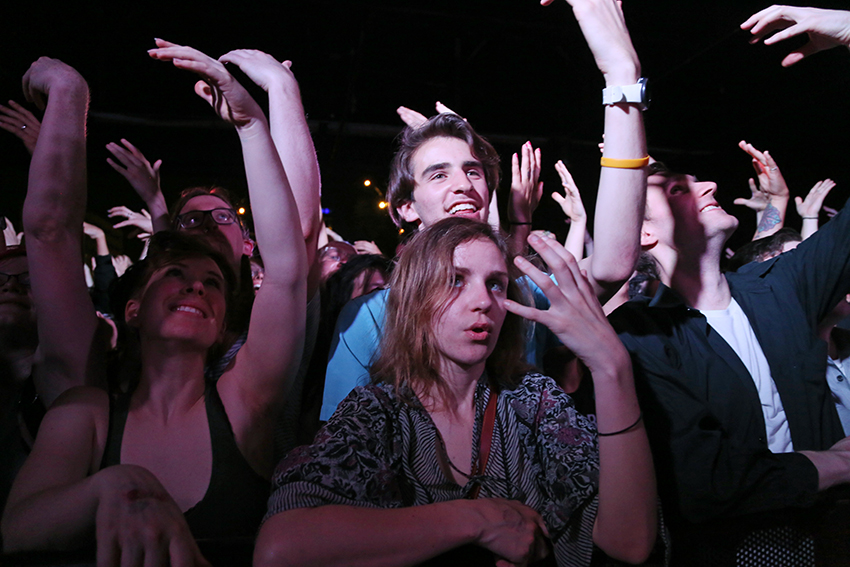 Levitation 2018 is in full swing this weekend. Spanning across 4 days and 8 venues in Austin’s Red River music district, the niche and focused festival celebrates psychedelic music and art from a variety of subgenres. This year marks the festival’s return after a cancellation in 2015 due to inclimate weather. The Texan talked to a few festival goers after Friday’s Ariel Pink show at Empire Control Room to see why Levitation is making a comeback.

Listening to Ariel Pink for over a year, festival-goer Kit Logan said the act is one of his favorite music projects of all time. He said seeing them perform at Empire Control Room was an unforgettable time.

“We came here for Ariel Pink because he f*cking rules dude,” Logan said. “I got to see one of my gods of music tonight, so it super cool.”

Logan noted the larger size of the crowd is one he’s not used to. Being that Levitation brings together many similar artista in one place, the crowds tend to be larger than they typically would without the joint venture, something Logan said makes for a unique concert-going experience.

“Honestly it just so cool and everybody's here,” Logan said. “I feel like it’s usually a lot dive-ier, and (there are) lot less people at Ariel Pink shows. It’s usually weird to be weird.”

Having lived in Austin since 2013, Katelyn Santos, an Avenue 5 Beauty Institute student, has seen her share of shows at Levitation. She saw DIIV perform at Levitation’s 2015 event at Carson Ranch and said having the show inside a venue was a different experience, but enjoyable nonetheless.

“I saw him at the original psych fest,” Santos said. “I really appreciated his performance. Seeing it in this setting was different, but it was cool to see the whole set up come together.”

Santos said while the venue festival format isn’t the same as the outdoor, she is just happy the festival is still here. Following the death of larger Austin festivals such as Sound on Sound and Fun Fun Fun, she said it’s a relief Levitation pulled through this year.

“To see it transform was interesting,” Santos said. “At least they are continued it compared to just dropping it. Some of the other festivals in Austin have dropped off and i feel like it’s one of those things where it thrives in the right kind of situation. You see like all these shows have sold out so it obvious that there is a need for that, it’s cool to see it come together.”