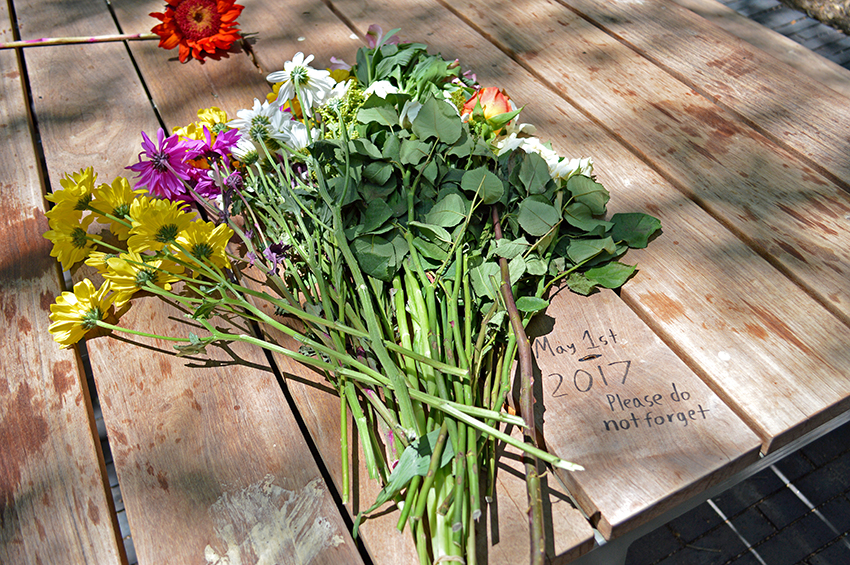 Exactly one year after UT freshman Harrison Brown was fatally stabbed on campus, Brown’s girlfriend and friend reflect on their experiences that tragic day and honor his memory.

“That day is the worst day of my life,” said Avery Robinson, who was Brown’s girlfriend of two years at the time of his death.

Robinson and Brown were from the same small town of Graham, Texas, and met the summer after Robinson graduated high school.

“That summer my parents forced me to get a job at Domino’s, and every day this guy would come, buy pizza and leave me like a $7 tip,” said Robinson, public relations junior. “Apparently Harrison would go home every day and tell his dad to give him money to buy pizza because there was a ‘super hot girl’ who worked there.”

Robinson said Brown was a genuinely kind person to everyone.

“He was such a nice person and was always happy and in the best mood,” Robinson said. “He was super energetic and always singing.”

After going to a private college, Robinson transferred to UT in spring of 2017, the same semester Brown would be killed.

Nutrition senior Colton Becker was also close with Brown, considering him a mentee and friend because of their common interests.

“He reminded me a lot of myself, and I wanted to take him under my wing,” Becker said. “Harrison was such a beautiful and special person.”

On May 1, 2017, Becker said he was at a meeting with UT administrators and student leaders when they heard about the stabbings on campus.

“We were meeting about the Be Safe campaign,” Becker said. “We were literally meeting about ways to keep campus safer when it happened.”

At the same time, Robinson said she was walking home after class when she saw a ton of police cars speed by her.

“Nobody knew what was happening at that point,” Robinson said. “A girl beside me started running and said, ‘Go, run, run! There’s someone stabbing people on campus!’”

Robinson said she soon received a call from Brown’s sister-in-law telling her to go to the hospital.

“Some of Harrison’s family was at the hospital and they didn’t know he was dead, they just heard he was stabbed,” Robinson said. “They still had hope and were trying to find him and talk to him. The hospital staff couldn’t tell them anything until his mom arrived. After she arrived, they said he had died on scene.”

Becker too was at the hospital with Robinson and Brown’s family when they received the official news about his death.

Robinson said she considered not returning to UT, but didn’t believe that was what Brown would have wanted.

Becker said that summer he and Robinson created a painting of Brown for his mother. He said he wanted to keep Brown’s memory alive.

“It’s a very sad time but it’s a good reason to find joy in the life Harrison lived,” Becker said. “I don’t want us to forget, I want us to remember him.”

Robinson now wears a watch that belonged to Brown.

“I got it for Harrison and he was wearing it when he died,” Robinson said, smiling at the watch on her wrist. “I have never been in love with anyone but Harry. I love him so much and still love him to this day.”