Home sweet home: Williams returns to Dallas, this time as a Cowboy 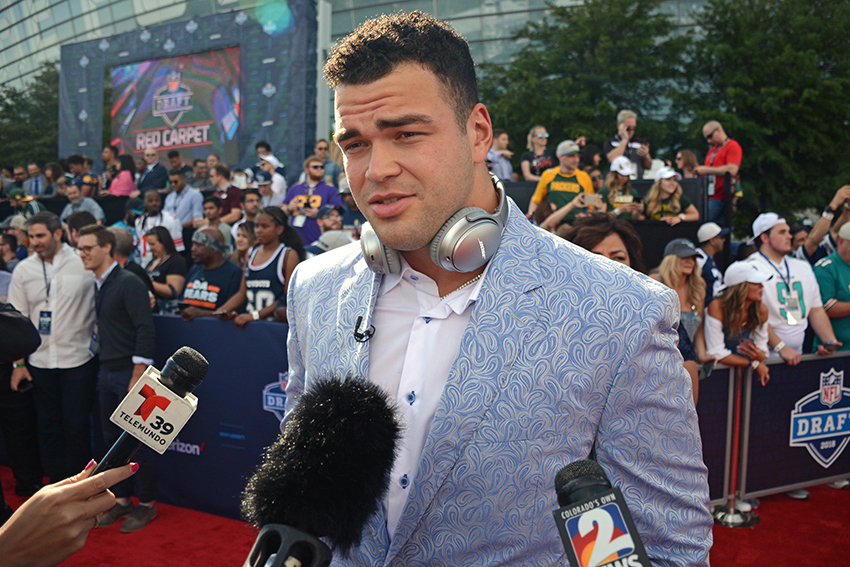 RLINGTON, Texas — All eyes shifted to Connor Williams hours before the 2018 NFL Draft commenced as the former Longhorn left tackle stepped onto the red carpet along with 21 other first-round prospects.

But not all 22 players who made their red carpet appearance were selected on the first night. As AT&T Stadium cleared at the conclusion of a star-studded first round, the green room where the 22 anxious first-round prospects once presided still had four names on the board — Williams was one of them.

By Friday night, he was just one of the two remaining prospects who made an appearance on the red carpet as he patiently waited to hear his name called from the green room backstage.

Midway through the second round, Williams received a phone call. It was the owner and general manager of the Dallas Cowboys, Jerry Jones, calling to congratulate and welcome Williams to the Cowboys’ organization.

“Being from Dallas, my phone starts with 972, so when I got the call I knew who was calling,” Williams said. “It’s a dream come true. I’m a Dallas Cowboy. That’s a shock to say right there.”

Nothing but raw emotion followed. The 6-foot-6, 297-pound left tackle immediately dropped to one knee, burying his face into his hands as Jones and Cowboys head coach Jason Garrett congratulated him on the other end of the phone.

Williams was selected with the No. 50 overall pick in the draft, becoming only the third Texas player to be drafted by the Cowboys in franchise history.

With his selection, the Coppell, Texas, native’s career will begin not only where he played his final high school game with Coppell High School, but also just 20 miles away from his hometown.

“(My parents have) been thinking about packing up and maybe get to the town I play in a couple of years,” Williams said. “But they don’t have to anymore. We’re gonna save a lot of money on plane tickets.”

Despite being able to experience the joy of getting drafted like the other prospects he walked in with, he had to watch all but one of them walk past him as every name was called. While this could have been discouraging to most, Williams saw it in a different light.

“I was tearing up (on Thursday) and it wasn’t tearing up because I was sad or disappointed,” Williams said. “I was so proud of them and happy for (the players) and their lives were changing every second. It was an amazing thing to watch.”

Williams admitted that he waited longer than he would have liked, but that it all worked out and it’s only lit a fire in him moving forward.

Throughout all of the post-draft press conferences and interviews, “amazing” was one word Williams couldn’t help but use constantly. Whether it be the spectacle of the NFL Draft or getting the opportunity to play so close to home, for Williams, there was no hiding the excitement.

For Williams, now it’s time to get to work. Williams will join one of the best offensive lines in the NFL, headed by the likes of Tyron Smith, Zack Martin and Travis Frederick. With these top-tier offensive linemen in tow, Williams’ position on the front is still uncertain.

Williams played the left tackle position during his time at Texas, but the Cowboys’ depth could potentially put him at the guard position.

“I was fortunate enough to work with the Cowboys at the local day,” Williams said. “Being able to work with Coach, we worked through guard and tackle positions. It’s not really clear, but walking the star tomorrow, it doesn’t matter where I am. I’m going to play wherever he wants me to play.”

Jones saw this and more from Williams’ tape, and also saw him as someone who could help address the Cowboys’ issues from last season. A 27-7 loss to the Atlanta Falcons, a game in which the Cowboys ceded eight sacks, was one of Jones’ biggest motivators for the Williams pick.

For Jones and the Cowboys, this was the perfect time to take him.

“The Connor Williams pick was a real classic here,” Jones said. “We decided to frankly cure what happened in Atlanta as best as we could.”

There’s a lot of excitement surrounding Williams’ arrival in Dallas. Cowboys running back Ezekiel Elliott immediately took to Twitter after the selection, excited by the opportunity to get his rushing title back behind the All-American and his offensive line.

But for Williams, the Cowboys provide him much more than just the opportunity to return home — they also give him a clean slate.