Fagan finds healing in gymnastics after losing mother to cancer 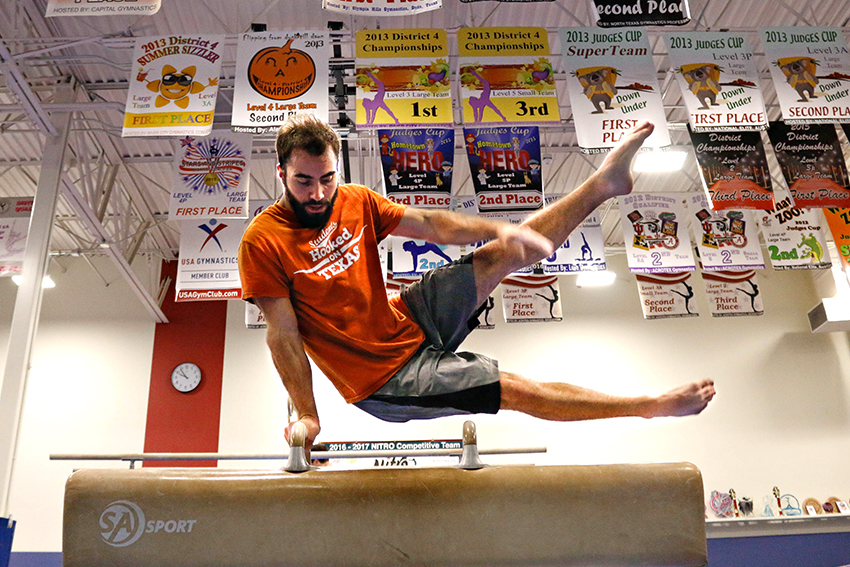 Balancing a busy college schedule with a sport is often a difficult challenge, but having a passion for something can help individuals get through life’s toughest adversities.

UT gives gymnasts from all backgrounds and skill levels the chance to join the club team and compete against teams across the nation. For junior gymnast Liam Fagan, UT gymnastics is more than just a sport; it’s an outlet.

“It is a way for me to forget about everything else, like my problems, and just focus on the one specific task that I enjoy doing,” Liam said.

Gymnastics requires not only physical power, but mental power as well. After losing his mom to brain cancer when he was 13 years old, Fagan realized how important it was to stay both positive and mentally strong.

“I always felt that I was doing fine and handled it the best out of all of my siblings,” Fagan said. “It wasn’t until coming back to it that I realized how much of an impact it had on my life.”

Fagan’s father and siblings not only admire his ability to handle tough situations, but also recognize the role gymnastics has played in his life.

“Gymnastics has greatly influenced Liam’s life,” said Fagan’s brother, Matthew. “He would be practicing, at home or the gym, and would get a lot of compliments from older adults, and I think this really helped his overall confidence.”

After quitting gymnastics his sophomore year of high school, an old friend and current member of UT’s team reached out to Fagan and asked him to come
practice with them.

“Once he started swinging and tumbling again, I could see it in his face — his drive to compete and improve himself — something I haven’t seen in him since high school,” sophomore gymnast Remy Fenrich said.

Slowly but surely, Fagan was finally back in his element, competing in the sport that shaped him into the more positive and driven person he is today.

“It is just what I love doing,” Fagan said. “It provides an outlet to center myself and relax mentally. I love the challenge it provides and the different skill sets that each event requires.”

His outlet in gymnastics has even helped him stay focused through the hard times and kept him in touch with reality.

“At my last competition, I was really stressed out about upcoming tests, essays and projects,” Fagan said. “But I suddenly realized and told my dad that my problems are not always as significant as I think they are. Sometimes you need something that really puts things into perspective.”

Through it all, Fagan still remembers his mom and her impact as he continues his gymnastics journey, since she was the one who first got him into the sport. And he’s still as driven as ever to succeed at what he loves.

“Don’t stop doing what you love,” Fagan said. “The best advice I could give someone is even if it seems as if things will not be OK, you can and will get through it. It is important to keep the people that you have and love close to you.”