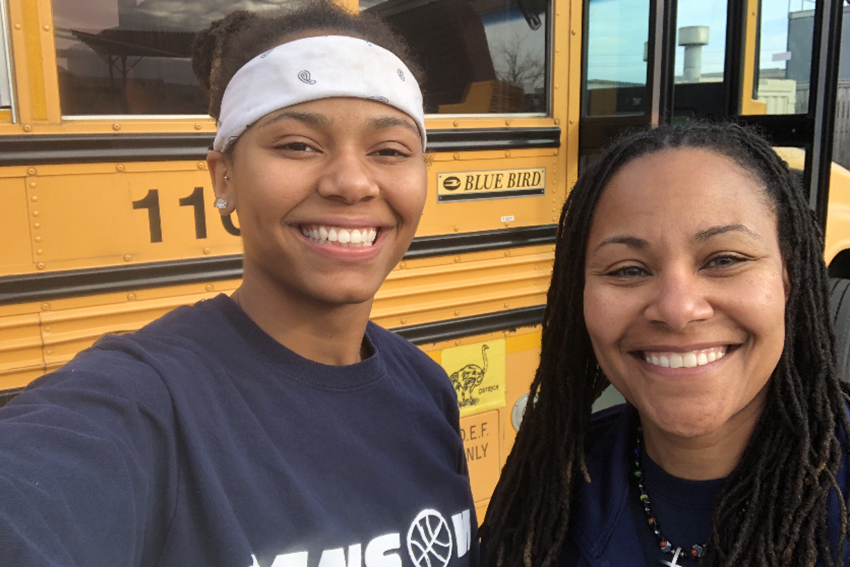 Erica Routt has always looked up to her daughter, Shae.

Shae never quits. The Austin native is a natural athlete and was drawn to sports at an early age. She had tried soccer, softball, gymnastics, volleyball, track and dance, juggling many of them at the same time. Whenever she started a new sport, she made sure to see it through a full season before giving it up.

But as Shae entered into the eighth grade, Erica found herself looking up to Shae in a different way.

“Can I just do basketball?” Shae asked her mother. Erica was pleased by the question.

Erica played for Texas from 1992–1996 under former head coach Jody Conradt. She helped Texas reach the second round of the NCAA Tournament in three of her seasons before playing professionally in Turkey and Israel.

The former Longhorn had been secretly hoping Shae would play basketball, but also didn’t want to add any pressure.

“I wanted her to try and do as many things as possible,” Erica said. “Just because basketball was my love, I didn’t want it to be like, ‘You’ve got to play
basketball, there’s no other sport for you.’”

Shae began picking up the sport in sixth grade, and played with her middle school team the next year, in addition to volleyball and track. Erica asked her why she wanted to focus on basketball.

The Routts agreed that Shae would focus solely on basketball that season. The decision paid off. Shae received an offer and committed to play for Texas at just 14 years old.

Once Erica realized Shae had the potential to make it to the collegiate level, she did everything in her power to develop Shae as a player. She coached her daughter all throughout high school, first at Kempner in Sugar Land, Texas, then Reagan and finally Akins in Austin.

The pair had to adjust to life on the hardwood together. Erica had to learn the difference between being Shae’s mom and being Shae’s coach, and when to fill each role.

“One of the things I learned from playing under Coach Conradt was, you know, stuff happens on the court. And then once we leave the court, we leave it there,” Erica said. “I think it was a struggle at first … (but) it worked really well because it was both of us.”

”It’s fun because she’s always trying to make me better,” Shae said. “When we’re in the gym, when she’s coaching me, she’s more on me. And then, when we come home and she’s being a mom, she just gives me advice, she’s not trying to push me or anything. She just gives me words of encouragement.”

Shae tore her ACL during her junior year and used the time off to test the waters again on her recruitment. She decommitted from Texas in Sept. 2017, but eventually signed with the team again on April 27.

“I was just opening up my options to see what other opportunities I could have besides going to Texas,” Shae said. “And then once I did that, I realized Texas was the only I wanted to be.”

Shae will graduate from Akins High school on May 31 and is looking forward to donning the same orange and white uniform her mother used to wear. Erica’s excited to be “just a mom” next season and continuing to see her daughter grow.

Does she think Shae is ready for college?

“Honestly? Yes and no,” Erica said. “I think yes because you want your kids, when they leave high school, to be like ‘Alright!’ And send them off into the world and go out and conquer. And then you’re thinking, ‘No, because that’s my baby.’”