The Daily Texan • May 3, 2018 • https://thedailytexan.com/2018/05/03/undocumented-student-overcomes-financial-struggles-to-finally-graduate-at-ut/ 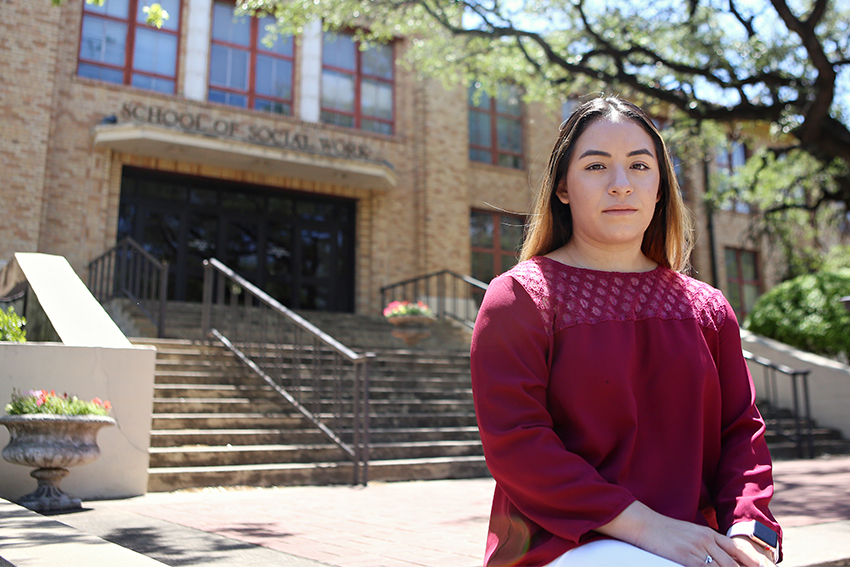 Five years ago, Eveling was shocked by her housing bill for her first semester at UT. Looking at the thousands of dollars she owed the University, she wondered what she would do.

“My tuition was paid for with some scholarships that I had, but what I didn’t know and what I later found out was that my room and board were not covered by the scholarships,” Eveling said, remembering the experience. “I just kept wondering, ‘Why didn’t anyone tell me?’”

She wasn’t allowed to register for spring classes until she paid the bill, but she didn’t have the money.

Feeling defeated after her first semester in college, Eveling returned to her home in Houston.

“That was my very first college experience, and it was harsh,” Eveling said. “I felt like I hit rock bottom.”

After working and saving up for a year, she was able to pay the bill in 2014 and returned to UT.

Eveling is graduating with a social work degree this May, but she had to overcome many financial limitations as an undocumented student.

Born in Chimalhuacán, Mexico, Eveling moved to Houston with her family in 1993 when she was just three years old. She successfully graduated from high school, but she struggled to figure out how the college application process worked as a first-generation student.

Her high school’s college prep program only catered to U.S. citizens, so Eveling was left to tackle college admissions and financial aid alone, making it difficult to understand college expenses.

She reached out to the Office of Financial Aid for help but discovered the limited availability of financial aid for undocumented students.

“My parents weren’t able to help me, so I just completed my very first semester (and left),” Eveling said.

Going back home, Eveling questioned if she should even continue pursuing college.

“At one point, I realized why so few Hispanic immigrants graduate college,” Eveling said. “There are just so many barriers to overcome.”

In 2015, the U.S. Department of Education estimated 5 percent to 10 percent of undocumented students pursued higher education and even fewer attained a college degree.

“This is also what fueled me,” Eveling said. “I didn’t want to be another statistic, another student who started college but dropped out.”

To save up for school, she went to work for her dad’s construction company. During that time the Deferred Action for Childhood Arrivals program had opened, so Eveling saved up for the application fee and applied.

She then enrolled at Houston community college as a full-time student and worked two full-time jobs to be able to pay her debt.

“I (saved) literally every penny I had in order to save up enough money to come back,” Eveling said.

A year passed before Eveling saved enough money to enroll at UT. Upon returning, Eveling discovered that a scholarship she had received during her first semester was no longer available to her because she had withdrawn.

But with her DACA permit, Eveling managed to work multiple jobs to pay for off-campus housing. The University also provided her with an institutional tuition loan, which she pays back at the end of every semester.

Texas law allows qualifying undocumented students to pay in-state tuition and apply for financial aid from the state and their university through the Texas Application for State Financial Aid. Because funds are limited, institutional, private scholarships and state support may not always cover all college costs.

“A lot of times these students are having to pay for tuition and their studies out-of-pocket,” Jimenez said. “It can prevent a lot of qualified students, especially first-generation, from enrolling.”

Texas Exes, which provides more than $3.9 million in scholarships to UT students, said they don’t have a scholarship specifically for undocumented students because they do not verify immigration status in their application.

“The Texas Exes scholarship application does not distinguish between someone who is undocumented or a citizen of another country,” said Kim Gundersen, Texas Exes’ Associate Executive Director. “If an applicant matches the criteria for one of our many scholarships, they will be considered for the award.”

The Monarch program currently helps undocumented students pay for professional development opportunities with scholarships ranging from $200 to $500. Jimenez said the program hopes to expand these scholarships through fundraising.

“We would like to bring in more money to help provide for those students and take off that burden so they can do better in school,” Jimenez said.

Eveling said paying for her studies over the last three years has been difficult.

“Whenever you have to work multiple jobs and go to school at the same time, it gives you very little time to enjoy the college experience and to enjoy having extracurricular activities,” Eveling said. “I know I have missed out on a lot.”

When the Trump administration announced the end of DACA last September, Eveling worried her hard work would go to waste. Thanks to a district court order, DACA is currently intact, but she hasn’t been able to save up for the nearly $500 renewal fee yet because of graduation expenses.

Eveling said she would like to see a permanent immigration solution or more financial aid for undocumented students. Despite the economic obstacles, she said she is proud of herself for
achieving her dream.

“I wanted to prove to myself and everyone else who looked like me that our dreams have no borders and our dreams can belong at UT,” Eveling said.

After walking the stage in May, Eveling will return to Houston to pursue a master’s of social work at the University of Houston.