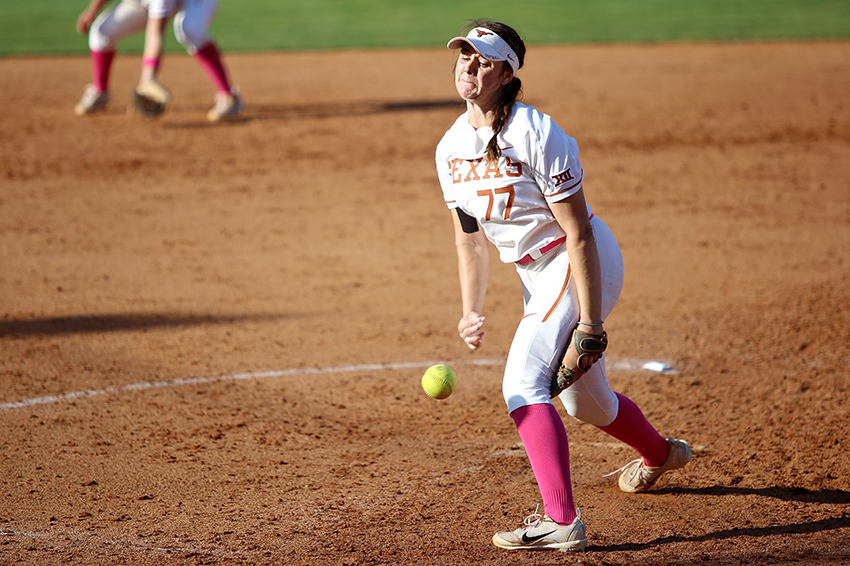 In the closest, most pivotal games of the season, the Longhorns came out on top, beating the Golden Gophers of Minnesota 2-1 on Friday night.

In the double-elimination format of the tournament, a win in game one is crucial for the team’s future postseason success. The team can now lose its next game and still have a chance at advancing to the regional final.

“It’s good to get off to a good start,” head coach Connie Clark said. “I thought we played really well in all facets of the game. We needed every bit of defense, while our young infield played like veterans. We hit on all cylinders and it was a great team effort tonight.”

Senior ace Paige von Sprecken pitched one of the best games of her career against the No. 25 Minnesota team. She pitched a seven-inning complete game allowing only a single run, while scattering four hits.

The key to von Sprecken’s success in tonight’s game was her plethora of different pitches. Her command on how much heat gets placed on each ball also played a large role.

“That’s one thing she does really well,” Clark said. “I think she gives you a look with three different speeds so she isn’t just going at you hard. Ellsworth calls the game and I thought they did a really nice job. I thought they got better as the game went on by setting hitters up and working ahead in the count.”

Adjusting to an impressive Minnesota lineup filled with strong batters was important in achieving the victory. Knowing how to work a batter and how to get batters out in key situations made the difference.

“Me and Paige have a really good relationship and there’s a lot of trust there,” sophomore catcher Taylor Ellsworth said. “Knowing that I could get a waist pitch not called for a strike on the first pitch, and her work back to get a batter out is a main goal for us, and that’s just a trust thing. Being able to work around batters and not just go straight at them every single time is very important.”

The game-winning run was scored by sophomore Kaitlyn Washington, who was driven in by the team’s other Kaitlyn, sophomore Kaitlyn Slack. The game had been tied heading into the top of the sixth before the Kaitlyn’s got to work.

“I was just trying to stay aggressive,” Slack said. “I knew that I was only going to get one best pitch of the at bat, so I attacked the first pitch and it fell. So I was happy with that.”

The team is set to take on No. 5 Washington on Saturday, which will determine who moves directly to the regional final.