The Daily Texan • May 23, 2018 • https://thedailytexan.com/2018/05/23/second-annual-austin-chicken-wing-festival-didnt-chicken-out-in-spite-of-stormy-weather/ 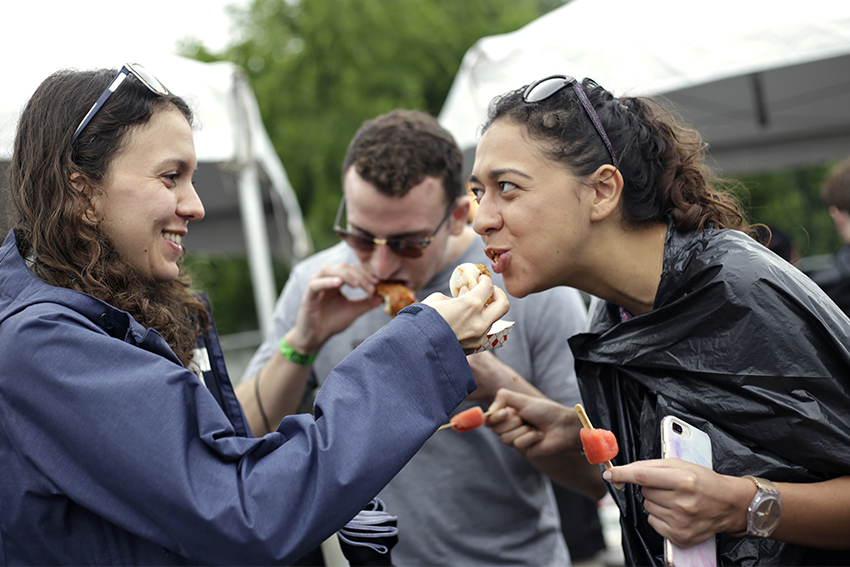 Some people may prefer dry rubs, but on Sunday, May 20, attendees at the second annual Austin Chicken Wing Festival got a heavy helping of wet as they braved heavy rain and wind to pick wings clean and drink beer.

This year’s festival took place at the Auguste Escoffier School of Culinary Arts from 1 p.m. to 5 p.m., though attendees who had paid for V.I.P. tickets were awarded entry an hour earlier. Sports bars such as Wingzup, Cover 3 and Sam’s Boat made welcome appearances, as well as other eateries such as Wild Chix & Waffles and Tso Chinese Delivery. Most of these restaurants offered one option to festival goers, helping lines move at a steady pace.

While the weather turned sour early on during the festival, patrons did not seem deterred thanks to the atmosphere and the wings.

“It’s all-you-can-eat, and bird is the word,” said Lisa Sanchez, who attended the festival with her family and stayed mostly dry with the help of a poncho.

The participating restaurants at the festival also braved the harsh weather as best they could. One of the more popular vendors serving chicken wings, Wingzup, offered a simple but reliably flavorful spicy lemon pepper wing, which patrons could couple with ghost pepper or Korean chili sauce. Meanwhile, Donkey Mo’s, a Korean fried chicken restaurant, served up sweet wings elevated by crunchy breading, and their stand boasted one of the longest lines at the festival. One of the other standouts was barbecue chain Smoke Daddy’s, which offered savory smoked wings instead of deep fried ones.

For some festival goers, of the most surprising wing-inspired offerings at the festival was a vegan option — fried cauliflower covered in Buffalo sauce and ranch — offered by vegan gastropub The Beer Plant. While some attendees expressed distaste toward it, others expressed great enthusiasm for it.

“[The cauliflower] is my favorite thing so far,” said attendee Erica Barnhart.

Barnhart’s companion, Blake Bowers, agreed that it was tasty, saying that it was similar to the Buffalo cauliflower at Alamo Drafthouse. However, Barnhart and Bowers agreed that The Beer Plant’s take on the dish was better because it was covered in more sauce.

While sampling the available options, patrons could vote on what they thought were the best wings and the most creative dishes. Judges were also present to decide on both of these categories.

By 3 p.m., the weather had calmed and the festival kicked off its spicy wing eating contest in which participants competed to eat 10 wings in the fastest time. The wings, provided by Tso Chinese Delivery, used a sriracha-based sauce. Patrons gathered around the contestants and cheered them on during the brief but furious battle of speedy munching.

Attendee Greg Lesson emerged the victor from the battle and won a $40 gift card to any of the eateries participating in the festival. For anyone hoping to take on the spiciest of spicy wings, Lesson had just one tip: “Don’t be scared.”

Lesson said he plans to use the gift card at Tso Chinese Delivery, won over by their rangoons.

While the weather was not the most agreeable, the 2018 Austin Chicken Wing Festival proved to be a step-up from its first iteration, and may continue to draw in larger crowds in the coming years.