It didn’t take long for things to unravel for Texas. Well, actually, it did.

Texas trailed Arkansas just 3-2 after the fifth inning in what was a competitive game. Then, the sixth inning started. Texas’ ace pitcher Nolan Kingham left the game after giving up back-to-back walks. Then redshirt junior Parker Joe Robinson walked two-straight batters, including one with bases loaded.

Redshirt junior Josh Sawyer followed Robinson. He, too, walked a batter with bases loaded, raising the question: Should head coach David Pierce have stuck with his ace pitcher Nolan Kingham?

“(In) hindsight, you let (Kingham) work through it,” Pierce said. “His pitch count was fine, but we haven't had any issues with Parker Joe. I thought it was the right time. In this case, Parker Joe walks two guys. He hasn’t walked two guys the entire year back-to-back. It was unfortunate, and we just couldn’t unravel the sixth inning.”

Arkansas extended its lead to 5-2, and with bases loaded and still no outs, the Longhorns were desperately trying to just stay in the game. As Arkansas drew the walk to grow its lead to three runs, a collection of dark clouds hovered over TD Ameritrade Park.

That’s when things got interesting in Omaha. Here’s a timeline of what unfolded:

First pitch is thrown and No. 13 Texas versus No. 5 Arkansas is underway. 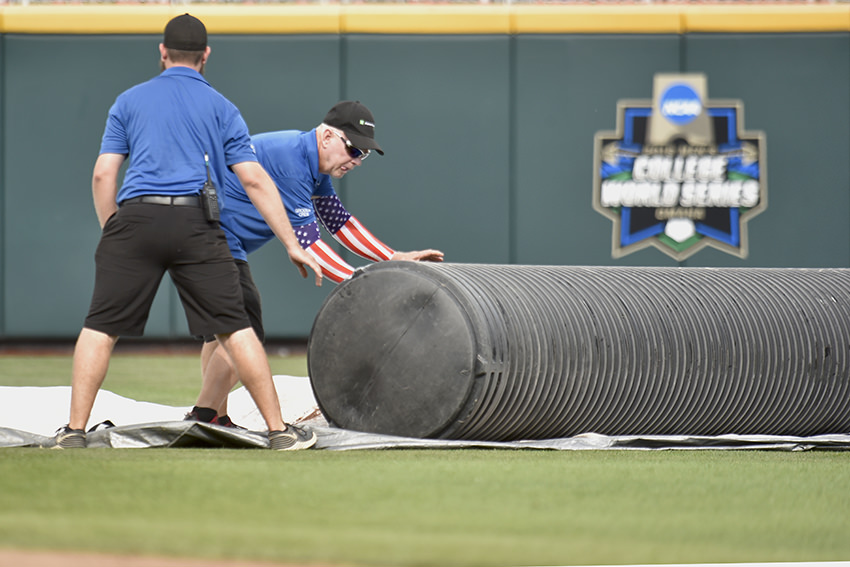 The Razorbacks extend their lead to 5-2 before a storm nears TD Ameritrade Park, forcing the College World Series grounds crew onto the field as officials order both Texas and Arkansas to evacuate their dugouts and seek shelter in their respective clubhouses. The grounds crew quickly rolls out the tarp over the infield just in time for the brief shower.

After 15 minutes of showers, the rainfall concludes and the grounds crew begins to sweep rainfall off the tarp.

After yet another hour of the delay, the tarp is removed from the infield and both teams return to their dugouts. 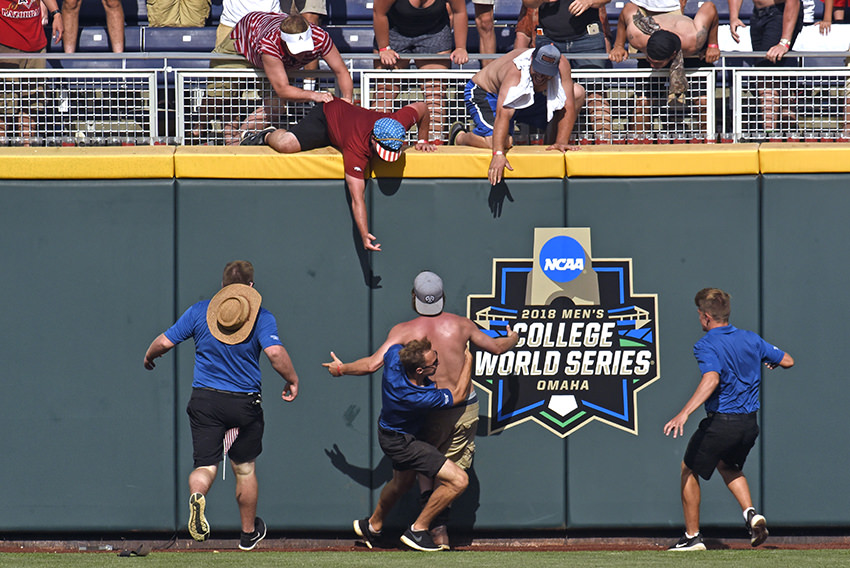 Fans patiently wait in stands for another hour, but they are finally provided some sort of entertainment.

For the second time during the lightning delay, a fan jumps over the outfield fence and onto the field. This time, a shirtless spectator hopped the fence in hopes of retrieving one of the many beach balls that were floating around the outfield sections.

The shirtless hero successfully returns the ball to the outfield fans, but is spotted by the grounds crew. The man attempts to jump back over the fence but is unsuccessful as the crew quickly approaches him.

The man attempts one more jump, this time getting assistance from other fans in the outfield stands as they try to pull him up. The man grabs one of the fans’ lowered arms, but is tackled to the ground almost simultaneously, and is escorted off the field before getting handed off to authorities.

After two hours and forty-nine minutes, both teams return to their dugouts and action resumes.

As Texas trotted back onto the field, it wasn’t Sawyer who walked toward the mound.

Pierce opted to go with junior pitcher Chase Shugart, who has served as the Saturday starter throughout the season.

“The thinking was, ‘We’re in a pickle, we need to get our best guy in the game right now,’” Pierce said. “And if we can get within one run, as far as giving up one run, so it’s a four-run deficit, and then we can tack on runs, maybe two, then we were going to stick with Chase. … They just continued to hit and created a huge deficit.”

Three and a half hours later, at 6:40 p.m., the sixth inning came to a painful close for the Longhorns. The scoreboard read: Arkansas 11, Texas 2.

After the sixth inning and the nearly three-hour rain delay, Texas went on to lose to Arkansas, 11-5. The Longhorns will now face the loser of the No. 1 Florida versus No. 9 Texas Tech at TD Ameritrade Park at 1:00 p.m. Tuesday.