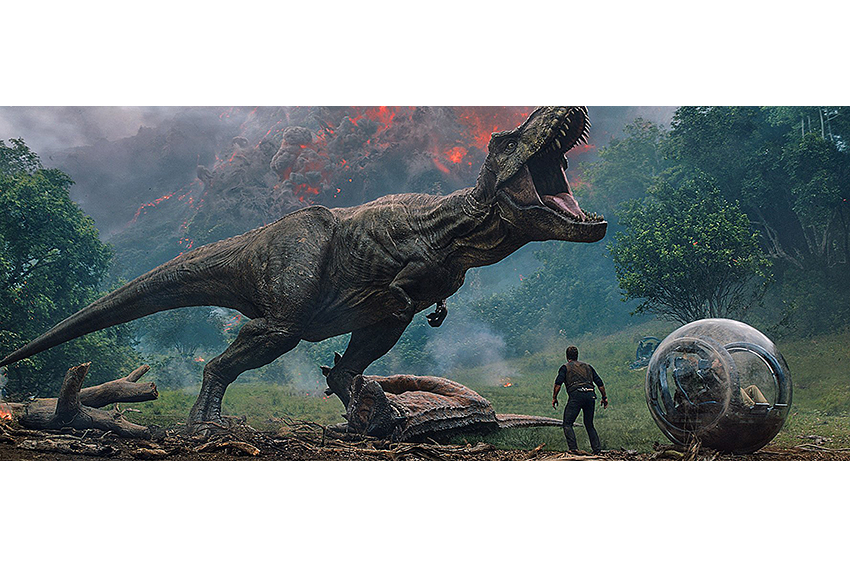 When “Jurassic World” hit theaters, it left a portion of the audience feeling underwhelmed. As nice as it was to return to Isla Nublar, many felt writer-director Colin Trevorrow played it safe by staying close to the formula of the first film. “Jurassic World: Fallen Kingdom” goes for something completely different.

Director J.A. Bayona starts off his film with a literal bang. The dinosaurs inhabiting Isla Nublar are in dangers of facing extinction when a volcano at the center of the island begins erupting. Following the decision by Congress not to intervene, Jurassic Park co-founder Sir Benjamin Lockwood (James Cromwell) enlists the help of former Jurassic World operations manager Claire Dearing (Bryce Dallas Howard) and dinosaur trainer Owen Grady (Chris Pratt) to lead an expedition to rescue as many species as they can before the island explodes.

Everything changes when Owen and Claire are betrayed by Lockwood’s aide Eli Mills (Rafe Spall), who transports the surviving dinos to the Lockwood Estate a third of the way through the film for nefarious purposes. This change of locale really causes the film to come to life.

Don’t take that as an indictment of the first act of the film. The visuals, as the island is being ripped apart, are jaw-dropping and heartbreaking, but it seems as if the film finds its focus by taking us somewhere new.

The Lockwood Estate is a character in and of itself. Its dark corridors, full of the most vicious of prehistoric creatures, create a Gothic mansion vibe that provides the setting for a web of intrigue. Trevorrow and Derek Connolly returned to write this film, with their skills drastically improved this time around.

The film isn’t afraid to wrestle with the ethical dilemma of genetic engineering, nor does it shy away from giving empathy to the dinosaurs. New character Maisie Lockwood (Isabelle Sermon) gives a youthful look at the horrors in which her grandfather is involved, in having a moral compass that makes her the most relatable character. Owen and Claire, along with the expectedly good performances from Pratt and Howard, are made more relatable by the fact that they now have a very clear goal. Nevertheless, even if these characters were poorly written, Bayona imbues the film with such an electric energy that it wouldn’t matter.

Bayona relishing in directing this film with a stylish eye, aided by cinematographer Oscar Faura. They effectively utilize a variety of elements from shadows to lightning to create a chilling monster movie tone. Nothing feels safe for a second, and that’s because Bayona is concentrated on immersing the audience in pure dread.

“Jurassic World: Fallen Kingdom” builds on this feeling as the film propels itself through a series of dazzling set pieces that leads to a climax that opens some enticing possibilities up for a future film, which, after this film, is very welcome. J.A. Bayona reinvigorates this franchise with a genre-bending, thoughtful piece of blockbuster cinema that’s a breath of fresh air in a crowded market of sequels. There’s zero doubt that this is the best film in the franchise since the original.

The island may be gone, but the thrills certainly aren’t.