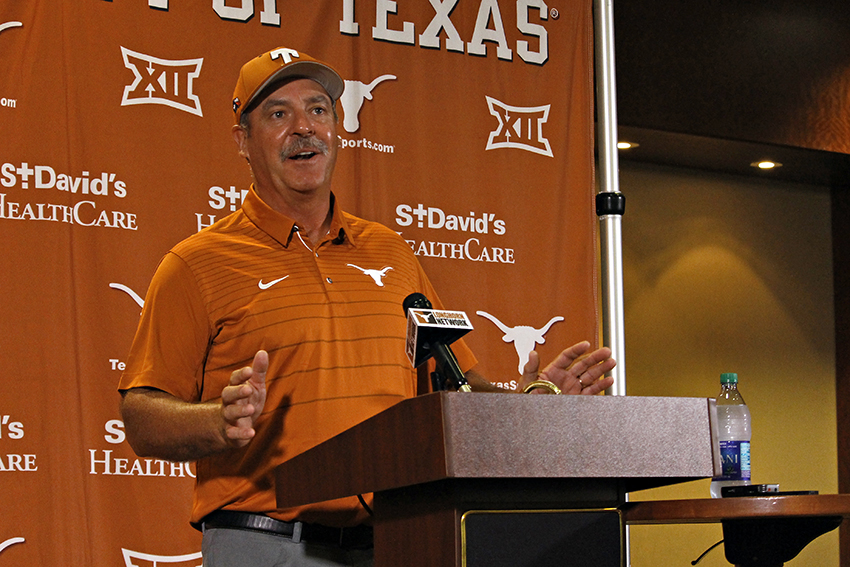 On Monday morning, Mike White was in the process of recruiting for the Oregon Ducks at a softball camp in Colorado. Twenty-four hours later, after Texas Athletics released the news of White’s hiring on Monday afternoon, he was introduced as the head of Texas’ softball program.

White’s introductory press conference on Tuesday morning marked the first time in 22 years that Texas softball has seen a captain at the helm other than Connie Clark. As White took the podium following an introduction from Chris Del Conte, vice president and athletics director, members of his family and six Texas softball players watched on.

“It took a lot to get me out of Oregon,” White said during his introductory press conference. “I’m excited to be here. The opportunity is second to none. There were a lot of coaches that wanted this job, but it needs more than that. It needs someone that is going to pour their heart and soul into it, and that’s what I’m going to do.”

White’s track record for maintaining a collegiate powerhouse speaks for itself, as he brought five Pac-12 championships to Oregon and five Women’s College World Series appearances over nine seasons.

White’s hiring also marks the second new head coach brought in by Del Conte this summer after Edrick Floréal was tapped to lead the track and field program earlier this month.

“I asked Mike, ‘Why Texas?’” Del Conte said as he introduced White. “He said, ‘Because I can win a national championship at the University of Texas.’ Oregon is not known for softball. We have 1,300 young ladies that play softball in this state. We have some of the very best that come here. He took a program with no state talent and went to Oklahoma City (the Women’s College World Series) five times in a nine-year period of time.”

Now, ready to lead a Texas team looking to build on a 33–26 record from the previous season, White said he is hoping to bring postseason success to Austin once again.

“My first goal would be to make regionals, then host regionals, obviously, which is a big stepping stone,” White said. “Then hosting super regionals, which means you have to be in the top eight. That’s a big step, and it takes a little bit of time, but hopefully I can attract some players to come here to help fill out our squad and be competitive straight away.”

White said that some of his initial objectives at Texas are to find assistants to fill out his coaching staff and to get started recruiting immediately.

“I’m going to hire the best,” White said. “This has no boundaries. Just like when I’m going to recruit. Obviously there’s great talent in Texas, but we’re going to recruit the best players. When you have an academic institution like Texas, I think that opens up a lot of people as far as just the academics part of it, and then (there's) the athletics side of it — get good coaches and have great facilities.”