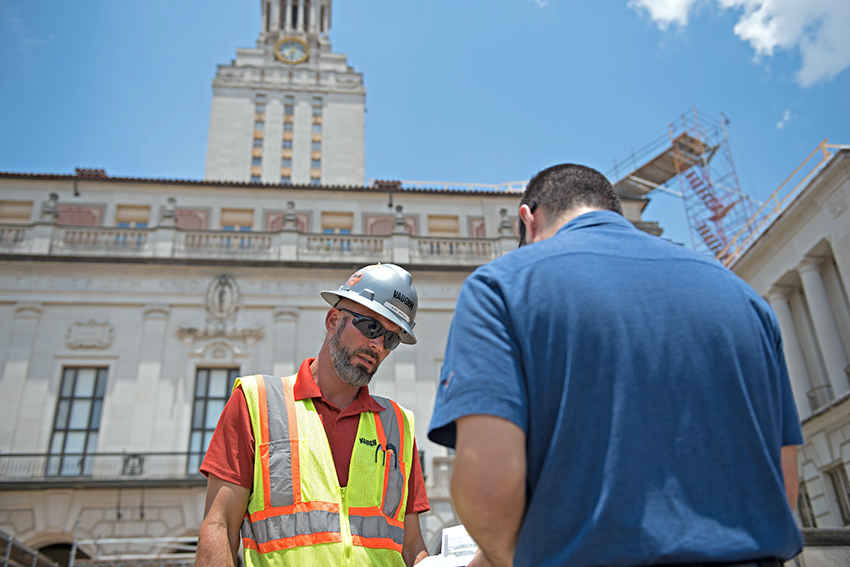 Students touring campus this summer have not seen the typical picturesque view of the UT Tower, but have instead been met with scaffolding and fencing as renovations continue on the Main Building.

The renovations include replacing parts of the roof, waterproofing the terrace and installing permanent wheelchair accessible ramps on the fourth floor outside the Office of the President. The project is currently in its first phase, which will last until August. The second phase, which focuses on the back of the Tower, is expected to last until January 2019.

Laurie Lentz, communications manager for planning, energy and facilities, said the visible scaffolding on the front of the building is there for worker access and overhead protection. All entrances to the Main Building remain open, and the building will look the same upon completion of the project, Lentz said.

“What you’re seeing wrapped around most of the building is actually overhead protection that the contractor installed over all the building entrances and areas where there’s kind of a safety issue,” Lentz said.

According to a presentation given to Main Building occupants by Edis T. Oliver principal for WJE Inc., the current visible scaffolding will remain until August. It will then be moved behind the Main Building once the second phase of the project is underway.

Tours of the UT Tower have not been affected, according to Tower Tours coordinator Brittany Woods. Lentz said the renovations have had minimal effect on the campus itself.

“There were three O permit parking spaces that had to be moved for this first phase going on through August, so those have been moved temporarily,” Lentz said. “But other than that, that’s really the primary impact, other than people noticing there’s something overhead.”

While summer orientation has not been affected by the renovations, incoming students have had questions about them, said orientation advisor Nikki Beck.

“A lot of (orientation students) have had questions about the renovations, and myself and other tour guides have had trouble answering the questions, as we don’t have any clue what’s going on,” said Beck, a radio-television-film sophomore. “I’ve heard … in my tours just how disappointed they are that they couldn’t get a picture in front of the Tower that looked nice because of the construction.”

Occupants of the Main Building and the building managers of nearby buildings were informed of the renovations, and Lentz said her office is working on a new system to inform campus of ongoing projects.