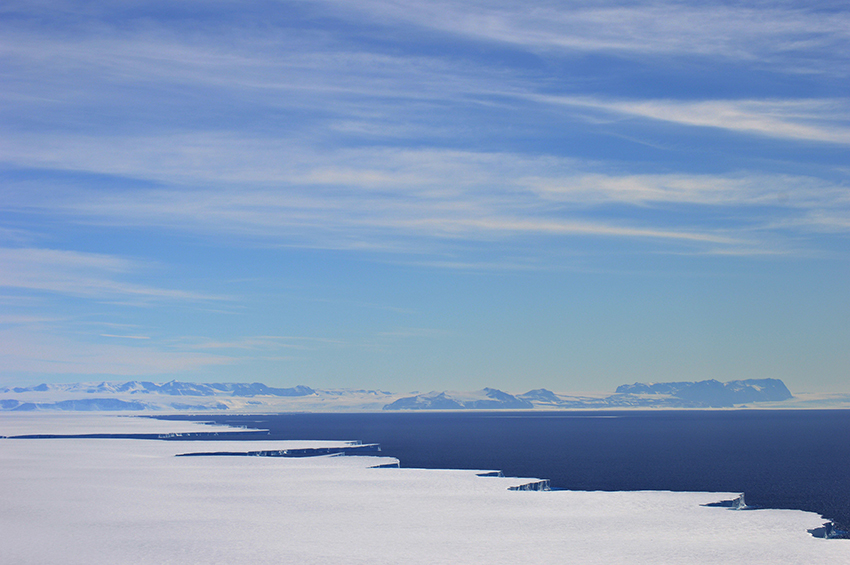 Humans have never lived with levels of carbon dioxide as high as they are today, and these increasing greenhouse gases are contributing to sea-level rise, according to a 2014 Intergovernmental Panel on Climate Change report. A new discovery by researchers and UT geologists increases projections of future sea levels, which means the damaging effects could be greater than previously predicted.

Researchers found a melting mechanism in ice sheets that previous sea-level rise calculations did not account for, increasing projections of future sea levels.

“The last time Earth was this warm was about 130,000 years ago,” said Jamin Greenbaum, geophysics postdoctoral fellow and an author of the paper. “At that time, sea level went higher than it is today by at least 20 more feet … and that was without human-induced climate change amplifying the warming.”

The paper, published in Science Advances, said that warm water flowing through the subsurface channels of the Antarctic Nansen Ice Shelf produces cracks. As surface meltwater enters these cracks, it breaks down the ice sheet at a rapid rate, destabilizing the structure.This glacial break up is called calving.

Using satellite imagery and airborne radar, the researchers linked this process to the Nansen sheet calving event in 2014, when the size of the crack in the ice shelf grew substantially.

Ice sheets that float on the ocean and hold back a large amount of land ice are particularly of interest because they have higher potential for sea level rise. The thinning of the ice sheets can then release land ice into the ocean, which contributes to sea level rise.

Christine Dow, geography and environmental management assistant professor at the University of Waterloo and an author of the paper, compared this phenomenon to the cork of a wine bottle, with the ice sheet acting as a cork and land ice acting as the wine.

“If (melting of the ice sheet) causes fractures that keep widening across the ice shelf, it can result in large blocks of ice breaking off the front forming icebergs; this is what happened to Nansen Ice Shelf,” Dow said. “Once the ice breaks off, the ice shelf has less power to hold back the land ice behind it and the glaciers can then speed up into the ocean, causing sea-level rise.”

Dow added that the Nansen Ice Shelf holds up land ice but not enough to make a significant contribution to sea-level rise.

Ice sheets are inherently vulnerable to rising temperature because of a complex system of changes in both the atmosphere and the ocean, according to Greenbaum. The paper cataloged several ice shelves that are experiencing cracks, such as the Petermann Glacier in Greenland and the Totten Glacier in Antarctica.

“What we're seeing is that both warmer air and changing ocean currents are beginning to accelerate melting and retreat of coastal glaciers in Antarctica,” Greenbaum said. “Our recent paper has made us more interested in ice surface properties than we were before, so we are now looking closely for further evidence of surface melt interactions with ocean bottom melting.”

Greenbaum said the research team plans to continue acquiring data on Nansen as well as the glaciers that hold back land ice that will contribute to sea-level rise in the future.

“Our larger focus continues to be on acquiring data necessary to better understand processes affecting several glaciers that could contribute substantially to sea level change in the coming centuries,” Greenbaum said.