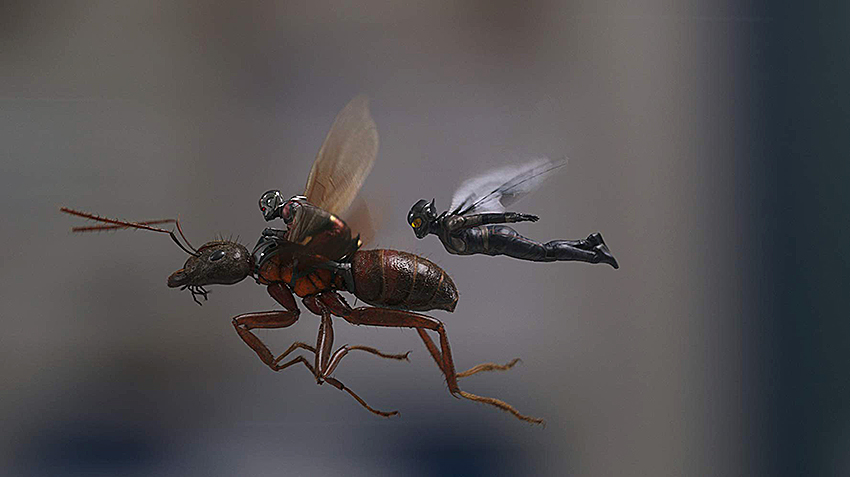 After “Avengers: Infinity War,” it made sense for Marvel to go smaller, but nobody expected them to go this small.

Superhero sequel “Ant-Man and The Wasp,” once again directed by Peyton Reed, shrinks down both its heroes and its scale in an attempt to provide a reprieve from the massive blockbusters that have dominated the movie season. For the most part, it succeeds. There a few bumps in the road, however, that keep this small movie from realizing its huge potential.

Wisely, the film picks up before the events of “Avengers: Infinity War.” Scott Lang (Paul Rudd) is under house arrest after assisting Captain America’s team in the fight against the registration of enhanced individuals. When Hope van Dyne (Evangeline Lilly) discovers that Lang holds the key to rescuing her long-lost mother Janet (Michelle Pfeiffer), she and her father Hank Pym (Michael Douglas) bring Lang back into the fold. Of course, things don’t go according to the plan, and the introduction of Ghost (Hannah John-Kamen), a mysterious woman with the ability to phase through physical matter, causes Scott and Hope to suit up again and fight the good fight.

The biggest virtue of “Ant-Man and The Wasp” is, well, its scale. This isn’t a film where the universe is hanging in the balance: It’s the simple story of a daughter trying to save her mother and a man trying to evade being caught for house arrest. Okay, there’s a bit more to it than that, but it never feels like it. Instead, Reed lets the film coast on a wicked sense of humor and outstanding visuals.

With the exception of maybe “Thor: Ragnarok,” this is Marvel’s funniest film yet. Paul Rudd’s improvisational style of humor never gets old, especially when it bounces off the dry sarcasm that Evangeline Lilly brings to the table. Once again, Michael Peña’s Luis steals the show. His fast-talking energy, goofy smile and all, recharges the film anytime it sags, matched only by the visuals.

Reed pulls out all the stops in this department. For a film about shrinking, “Ant-Man and The Wasp” sure makes full use of its concept. There’s a chase with a shrinking van, Lang growing to a monstrous size and too many size-changing action scenes to count. It’s here where Lilly gets to fully embrace her role as an action hero, commanding these scenes with headstrong confidence and a smirk on her face. She just might be many people’s new favorite Marvel hero after this film.

It’s unfortunate, then, that the third act of the film is not as confident as Lilly’s performance. It’s not the villains this time around — Ghost is as trippy and weird as need be and Walton Goggins plays a commendable slimy Southerner as mobster Sonny Burch — but the attempts at emotion where the film falls flat. As much as they try to build up the theme of parenthood here with a genuinely sweet connection between Lang and his own daughter, it falls flat on its face when Pym makes his voyage to rescue Janet.

As Pym finally reunites with her, the film tries hard to tug on heartstrings but is out of its depth, mainly because we have no idea who Janet even is, having spent next to no time with her. An easy fix for a main character’s problem at the end just adds insult to injury.

Despite these issues, “Ant-Man and The Wasp” is still wildly entertaining in its own right. Anchored by comedy and imaginative action sequences, this is another win for Marvel Studios, albeit a small one.

“Ant-Man and The Wasp”