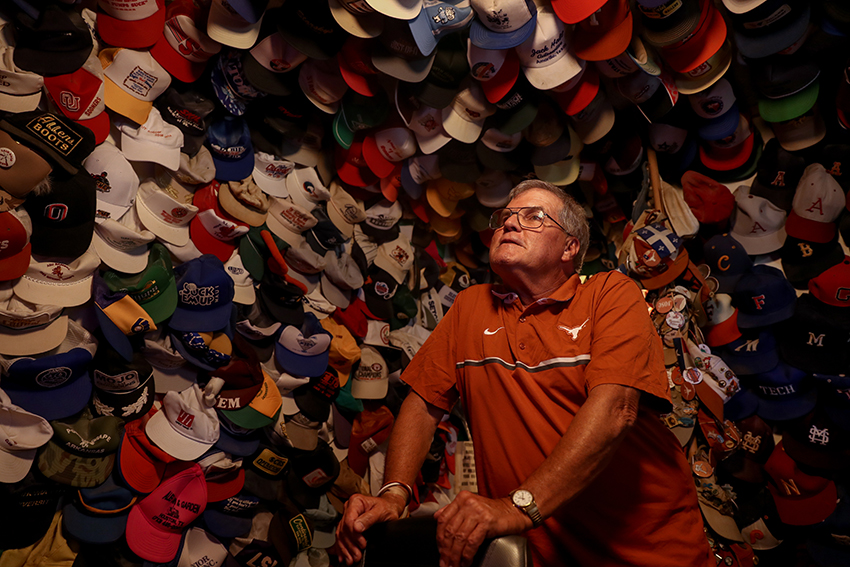 The living room of Scott Wilson’s North Austin home is completely packed with signed Longhorn memorabilia, game keepsakes and, according to him, a lifetime’s worth of memories.

The 66-year-old retired lawyer has been to the last 1,175 Longhorn baseball games and has only missed three games since 1981.

“I was like 26 years old when I started going to every game,” Wilson said. “I really liked it, and at some point a few years ago, I more or less became part of it, because I was there to cheerlead, I was there to lead the singing … I know all the players and they know me.”

Wilson keeps up with other UT sports as well. He has attended the last 498 consecutive football games — starting his streak during the 1977 season — and he regularly attends other events, such as swim meets, golf tournaments and tennis matches.

“I go to every UT sporting event I can,” Wilson said. “There’s some times I’ve been to as many as five or six in one day.”

Wilson attended UT for accounting and graduated in 1972. While he was at UT, Wilson became part of the Wild Bunch, a group of Longhorn baseball fans he refers to as “hecklers,” who sat over the top of the opposing team’s dugout, yelled jokes down to the field and played some elaborate pranks.

One of the greatest pranks they ever pulled off, Wilson said, was during a baseball game against Oklahoma in 1976. Throughout the game, the announcer asked multiple times for foul balls hit out of bounds to be returned back to the field, but Wilson said the Wild Bunch had another plan in mind.

“Finally one time, when we all were ready, they said, ‘Please return all balls to the playing field,’ and we threw 50 tennis balls out on the field,” Wilson said. “They were bouncing all over the place, and we had written on all of them, ‘OU sucks.’”

The Wild Bunch was just the beginning for Wilson. Since then, he has been in the crowd for four of UT’s six national championships in baseball, has met multiple generations of players and has settled into the role of leading “The Eyes of Texas” at away games.

Director of baseball operations Drew Bishop said when the team is on the road, people always ask if Wilson is going to make an appearance.

“He’s become a fixture of our program,” Bishop said. “If we’re there, he’s there.”

Wilson pulls up to games in style, driving a 1975 burnt orange Cadillac with horns sticking off the hood. Bishop said he recalls a time in 2009 when the team arrived at a strictly bus and team vehicle lot, only to find that Wilson, in his signature Cadillac, had somehow gotten inside to greet the players.

“He waits for us whenever we show up on the bus, he greets the team and acknowledges everybody that gets off,” Bishop said. “We’re always happy to have him there.”

Longhorn pitcher Beau Ridgeway said he can always expect Wilson to be waiting outside the bus to give the players a high-five and wish them good luck.

“All of us baseball guys just call him ‘Wilson,’” said Ridgeway, a corporate communication senior. “He always stands out for having our back, no matter what the score or the situation, so we all really appreciate him.”

While Wilson said there are too many items in his collection to pick a favorite, a framed text message from legendary late UT baseball coach Augie Garrido, who led the Longhorns to two national championships, is one of the most meaningful to him.

In the text, Garrido said “Scott- You are a new definition of the word loyal. Thank you for who you are and your lifelong commitment to Longhorn baseball.”

Wilson said he has no plan to break his baseball streak or to stop going to other UT sporting events. After all, he’s got a title to defend.

“I’ve probably been to more (UT games) than anybody, ever,” Wilson said. “And I’m not an athlete at all, but I’m competitive enough where I ain’t gonna let anybody catch me either.”