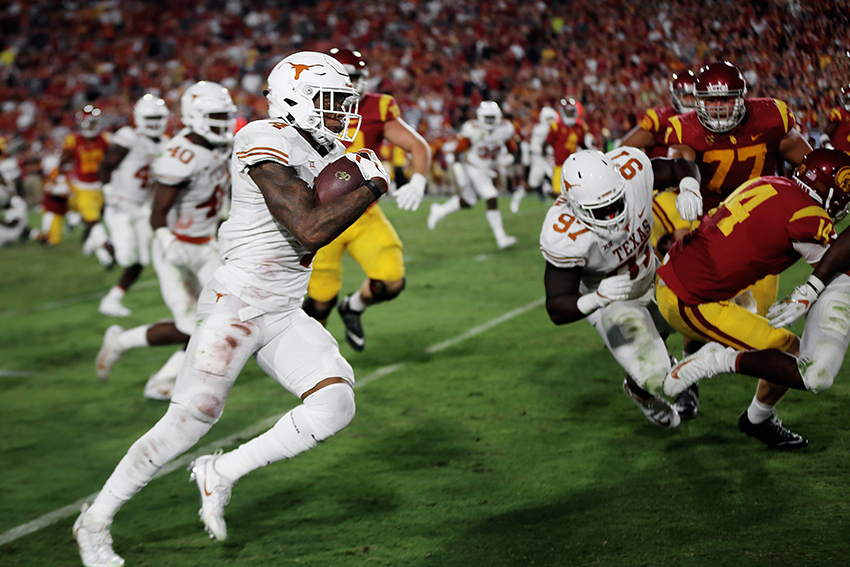 DeShon Elliott is no longer on the 40 Acres, but he apparently still has some unresolved feelings toward members of the UT coaching staff.

On Wednesday morning, Elliott sounded off on Twitter, saying that some staffers have been talking unfavorably about his decision to leave Texas as a junior.

“I’d really appreciate it if anyone on the current staff at the University of Texas Football team besides Craig Naivar, Jason Washington or Kyle Coats would keep my name out of there mouth and continue to bad talk me or any other junior that decided to leave early,” Elliott said in a tweet Wednesday morning.

“I hear you brother,” Williams tweeted.

Elliott continued his rant toward the team’s staff in a series of tweets posted shortly after the first one:

“We lead your team the best we could before making a decision to better our families. Which I believe you would do the same.”

“If you really ‘loved’ your players the way you portray them then you wouldn’t continually talk bad about them behind closed doors. Bad mouthing us to our brothers who we played for and cried and sweat for way before you stepped on campus.”

“Kept my mouth quiet about this, it’s the complete opposite of my personality but it has to come to an end. It’s been a continuous thing for far too long. – Da Joker,” Elliott tweeted.

A spokesperson for the UT football team said head coach Tom Herman was not available for comment.

The tweets were later removed by Elliott after being posted for several hours on the website. Both Elliott and Williams would later tweet the “Hook ’em” emoji at each another.

Elliott removed the thread of tweets and replaced it by tweeting, “Why So Serious.”

Herman has never publicly criticized any member of the team who departed after last season, leaving much speculation as to what could have prompted Elliott’s aggravation toward the staff.

Elliott’s decision to not play in the Texas Bowl during last year’s postseason in order to avoid injury for the NFL draft has long been a topic of controversy for numerous college players.

Elliott is now a member of the Baltimore Ravens after being selected in the sixth round of April’s draft, while Williams, who also chose not to participate in the Texas Bowl, was picked in the second round by the Dallas Cowboys.

An AP All-American in his final season at Texas, Elliott accumulated 63 total tackles, six interceptions and three forced fumbles for the team.