Hager’s emergence from the dark side 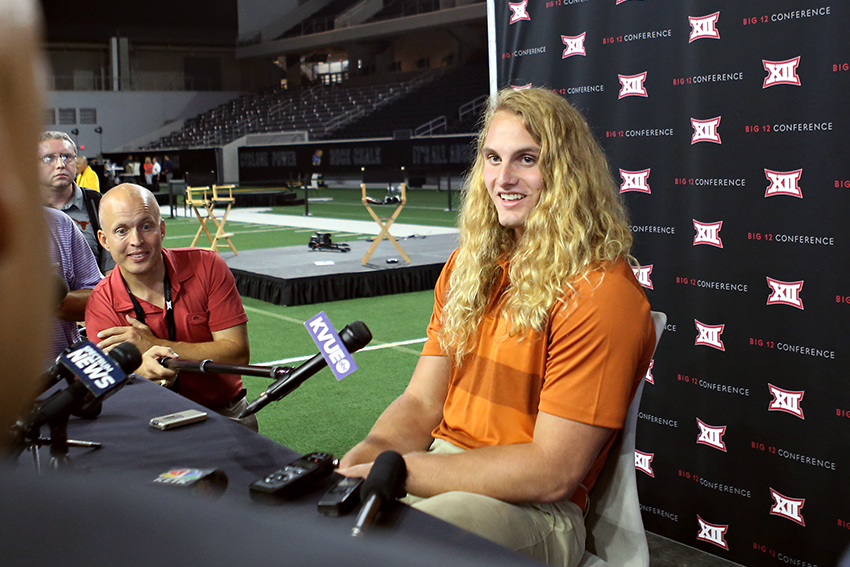 Texas senior linebacker Breckyn Hager has made headlines more than once throughout his Longhorn career — they just haven’t always been for what he does on the field.

Two years ago, Hager received national attention after saying the team’s plan was to “injure” former Texas Tech quarterback Patrick Mahomes ahead of the Longhorns’ matchup with the Red Raiders. Hager later apologized, but the reputation lingered.

Two years later, Hager is still one the most fiery athletes in the conference, but there is a noticeable difference in the outspoken leader.

Once fueled by rage during games, the preseason All-Big 12 member has shifted his intensity to a very different type of energy — love.

“Freshman or sophomore year Breckyn would tell you (his intensity comes from) anger and darkness,” Hager said at Big 12 Media Days. “Mid-junior to senior year (Breckyn) would tell you love, happiness, excitement, passion. It’s just how I’ve matured as a person. There’s different ways to tap into different types of energy. It’s all about channeling through love and not letting the man that I love down.”

Hager spent the majority of his time at Big 12 Media Days spewing positivity, but head coach Tom Herman took a moment to explain where a turning point in Hager’s attitude occurred.

Early on last season, tension between Hager and Herman was well-known around the locker room. But all it took was one moment for things to change between the two.

“It came at a really awkward time in the third quarter of the Oklahoma State game,” Herman said “We’re in the middle of the game … obviously it’s really close, top-10 team. He and I had some knock-down drag-outs earlier in the year and in the offseason. We hadn’t spoken much to each other.”

After a play in which Hager sacked quarterback Mason Rudolph on third down to halt the Cowboys’ drive, the linebacker headed toward the sideline. What happened next was an interaction nobody expected.

“It’s like out of a movie, it’s the craziest thing,” Herman said. “I give him a little, low-five, like ‘Hey, good job.’ He stopped in his tracks, takes his helmet off, looks at me and goes, ‘Coach, I’m sorry!’”

“I said, ‘For what?’ I started looking out on the field. Is there a flag? Did he facemask somebody? I said ‘Breckyn, what? Sorry for what?’”

“He gives me a big hug right there. I said ‘All right, Breck. I’ve got a game to coach here.’”

Since then, Hager has looked at things on the field through a completely different lens. The changes Hager has gone through weren’t just noticed by the coaching staff, though. Many of his teammates on both sides of the ball testify to his character development.

“My relationship with Breckyn will always be a brotherly love thing,” senior offensive lineman Patrick Vahe said. “I got his back regardless of anything. But when it comes to seeing him as a player and how much he’s evolved, I give mad respect for that.”

Hager’s establishment as one of this season’s key players further serves as an example of the level of respect that Herman has received around the locker room since last season’s Texas Bowl. Receiving Hager’s endorsement as “the best coach in college football” is a huge victory for the second-year head coach.

Last season was tumultuous, at best, for the Longhorns. However, now that the cliques have melted away, as Hager says, the runway is cleared for the team to fully buy in to Herman’s teachings.

“I think we all, as a team, have got to win some ball games,” Hager said. “I think winning answers every question that everyone has and the same with love.”

It’s safe to say that Hager has the “love” aspect more than covered. Now, all that’s left is winning. Starting Sept. 1 against Maryland, the Longhorns will have the chance to do just that.