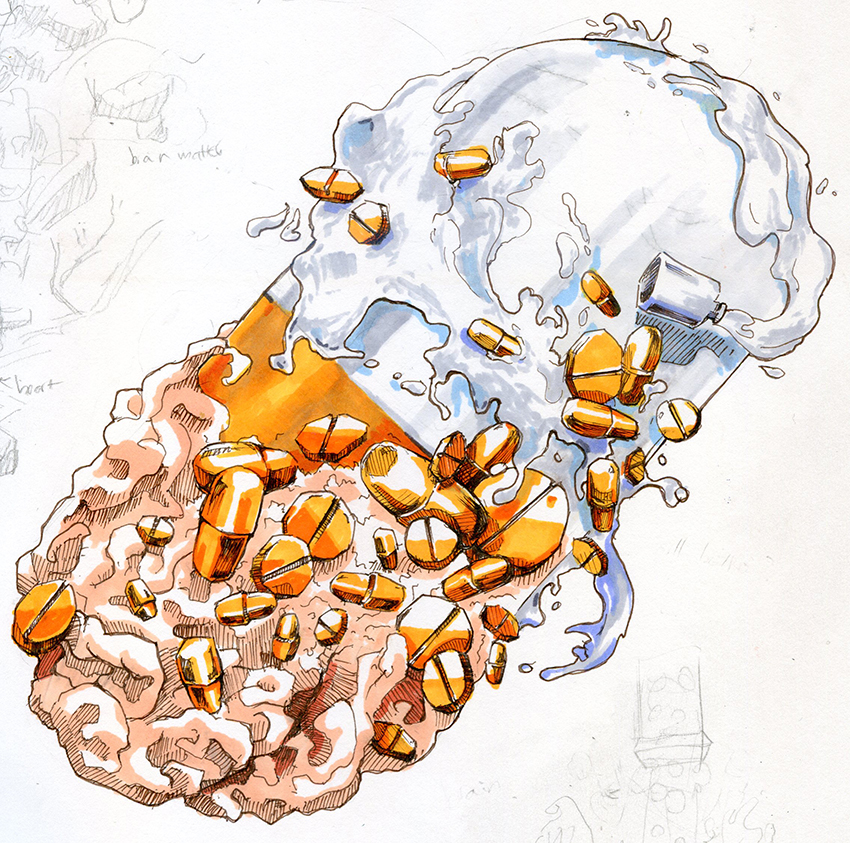 In the hyper-competitive college world, everyone is looking for an edge. A grade can dictate your academic future, and overloaded schedules have made sleep a luxury. About 13 percent of UT students see the answer in so-called study drugs such as Adderall.

Students without prescriptions should rethink turning to Adderall as a last-minute study aid.

The American Addiction Center reports that Adderall mimics symptoms of cocaine. According to the National Institute on Drug Abuse, although taking Adderall might improve your focus, it won’t make you smarter. In fact, a 2016 study showed that students who abuse prescription stimulants such as Adderall have lower GPAs than students who don’t. Long-term abuse can lead to depression, seizures, sexual impotence and even heart attacks. These risks should outweigh the allure of a short-term advantage for students who study with stimulants.

Adderall, a Schedule II controlled substance, is a prescription drug used to treat attention deficit hyperactivity disorder and narcolepsy. It enhances concentration, increases focus and can create feelings of euphoria. As an amphetamine, it’s also a stimulant. Unsurprisingly, it can be addictive.

Public relations junior Shelby Smith knows firsthand the risks and rewards of Adderall. She takes the drug for her ADD and has had her prescription since high school. She says that although it alleviates the symptoms of her condition, the side effects — even for someone who needs it — can be difficult.

“(Adderall) makes me focus better. It keeps my thoughts aligned, and I function better as a person,” Smith said. “But the thing about taking it is it almost sucks my personality out. I feel different, not as bubbly, and I don’t feel like my normal self.”

Smith is among the 7 percent of UT students who have an attention deficit disorder, according to UT’s Spring 2017 National College Health Assessment. She says that abusing Adderall without a prescription is not only risky, but also hurtful to those who are forced to take it for a condition.

Psychology junior Alex Barshop echoes Smith’s concerns. He’s had his prescription since age 14. Both Barshop and Smith said people have asked them for their prescriptions before. But here’s the thing: you could be arrested for having an Adderall prescription that’s not yours.

“People who take (Adderall) too much and take a high dosage of it (without prescriptions) don’t know what they’re doing,” Barshop said.

Using someone else’s Adderall is like wearing your friend’s glasses. It only helps if you have the problem in the first place.

“One of my concerns is the impact that (Adderall) use  ould have if combined with other substances,” Olson said. Alcohol, in particular, counteracts the effects of Adderall, and the combination increases your risk of overdose and death.

“Read about ADD. Actually talk to your friends that have it,” Smith said.

Barshop recommends that students study sober instead of using Adderall as a cop-out.

“You’re better off getting a good night’s sleep before a test. … (Unprescribed) Adderall just gives you the illusion of being more focused,” Barshop said.

At the end of the day, Adderall won’t give you the edge you need. You won’t find the solution to studying sitting in the medicine cabinet.

Laughead is a journalism junior from Houston.