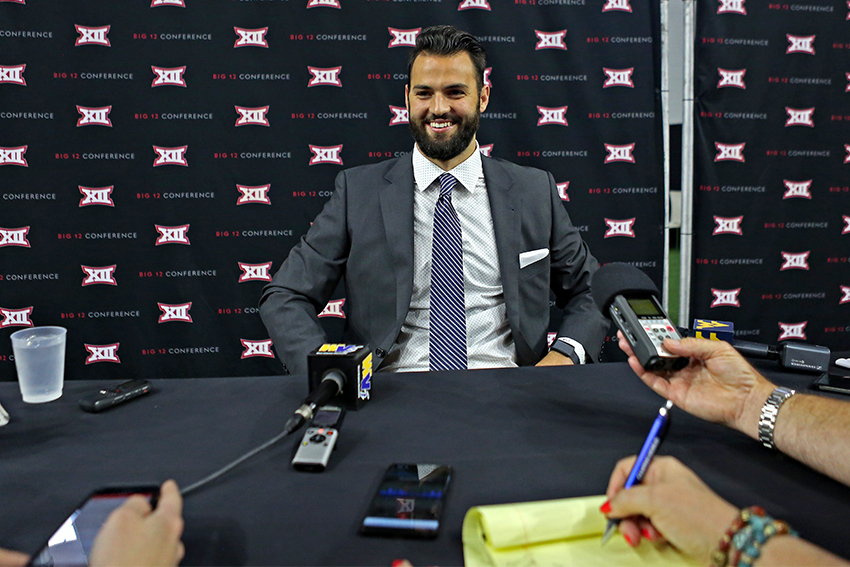 When you open to page two of West Virginia’s football guide provided at the Big 12 Media Days, it doesn’t reveal facts about the team or its history.

Instead, the Mountaineers placed a two-page endorsement dedicated to quarterback Will Grier’s Heisman Trophy campaign — in July.

With the Heisman Trophy presentation more than four months away and still 36 days until college football officially begins, the timing seems unusually premature for such talk to be generated.

If you ask head coach Dana Holgorsen how he feels though, he’ll tell you that there isn’t a doubt in his mind about it.

“I would never approve a campaign unless I felt like a player could handle it,” Holgorsen said in a news conference. “He's ready for this, he's prepared himself his whole life for this, and you will see as you talk to him throughout the course of the day, I got no worries about him not understanding expectations and how to deal with expectations.”

The team’s old-gold-and-blue-covered football guide provides a link to a full-fledged website produced by the Mountaineer athletics department titled Grier7Heisman.com, which lists everything from Grier’s stats and game recaps to bios of his wife, Jeanne, his 20-month-old daughter, Eloise, and internet-famous brothers, Nash and Hayes.

The school has never had a player finish higher than third in Heisman voting, but with such a potent offense at Grier’s disposal, many believe Grier has the best chance in the country at winning the award.

One thing is certain: It’s a long way removed from his controversial exit at the University of Florida. During his redshirt freshman season in 2015, jumping out to a perfect 6–0 record as the Gators’ starting quarterback was quickly forgotten when Grier was suspended for a full calendar year after testing positive for a performance-enhancing drug on the NCAA’s banned list.

He would later decide to transfer to West Virginia after being told "maybe a fresh start isn't the worst thing” by then-head coach Jim McElwain, per a 2016 Bleacher Report story from Grier himself.

Now, the once highly touted high school prospect has fully redeemed himself and is hoping to bring the Mountaineers to new heights this season.

Despite the hype surrounding his individual achievement and potential, Grier says he isn’t focused on the award whatsoever.

“That’s obviously a very prestigious award, and it would be an honor to win that award,” Grier said. “I think it’d be great for the school and for the state as well. This is a really passionate, passionate fan base. It would be great to bring something home for these people of West Virginia. It would be a great honor, but not to let that distract or take away from the true focus, which is winning games.”

Grier’s team-first attitude seems typical of anybody at this point in the year, but many of his teammates are, in fact, on board with the noise surrounding the senior quarterback.

“We’re all for it,” West Virginia wide receiver David Sills said. “If we were the voters, he would have the Heisman trophy, but we’re not the voters. We see what he does day in and day out. We believe that he's the best quarterback, the best player in the country, so it’s just at a point now where everyone has to believe it.”

Ironically, it seems like the only person not getting caught up in the Heisman discussions is Grier himself.

“The time’s just not right,” Grier said. “What’s right right now is me and my team preparing to win football games. That’s all I’m focused on. That other stuff, if you take care of little things, the big things, the championships and all that will take care of themselves.”

Even though Grier will continue to insist that now is not the time, a post on the official Mountaineer Sports website announcing the launch of Grier7Heisman.com says that Holgorsen met with Keli Zinn, West Virginia's deputy director of athletics and lead football administrator, last winter to discuss ways to promote Grier’s potential award-winning season.

So right now, it might just be about winning football games for Grier. But it doesn’t seem like that’s going to stop the rest of the country from talking about something more.