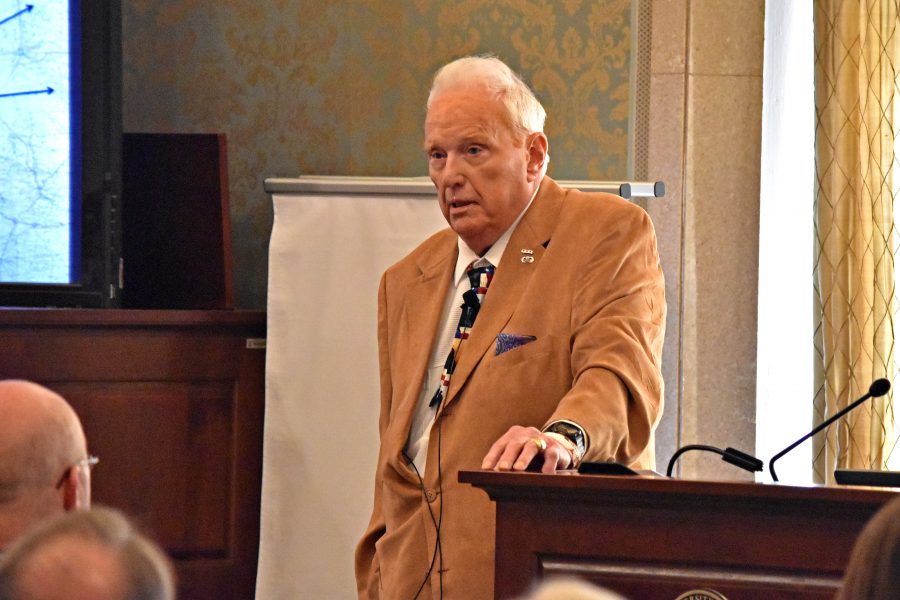 Legendary Texas booster and University supporter Frank Denius died Sunday morning. The 93-year-old was a Longhorn alumnus and longtime booster for the football team as well as a contributor to academic projects around the 40 Acres.

A member of the class of 1949, Denius was commonly regarded as the “10th most decorated soldier in the European theater of World War II” and attended UT football games and practices for over 70 years, according to a Texas Sports release written by fellow longtime University figure Bill Little.

As news spread of Denius’ passing throughout the morning, many UT members were quick to speak in high regard of the legendary Longhorn.

“Frank Denius was the ultimate Longhorn,” University president Gregory Fenves said in a statement. “His generosity improved the lives of thousands of students and allowed UT to grow into one of the great public flagship universities in the nation. He was a friend and advisor to me and to many previous presidents. I will miss him greatly but I know his legacy will last for generations here on the Forty Acres.”

As a dedicated supporter who rarely missed a Saturday kickoff, Denius was present for Texas’ national championship win in the 2006 Rose Bowl under former head coach Mack Brown.

“Mr. Denius was a special man and friend,” Brown tweeted. “No one cared more about @TexasFootball more than Frank. I often said he made more of our practices than I did. He will be missed!”

Frank Denius Fields was constructed in 1994, in part from a generous contribution made to the program by Denius and the Cain Foundation, and has served as a practice field for the team.

On Veterans Day in 2009, the University would officially name the northwest corner of DKR “Frank Denius Memorial Plaza” which hosts a display with the names of each student and faculty member who served in World War I.

“When Texas Memorial Stadium was undergoing various transformations through the years, it was Frank who stood sentinel, making sure that the original purpose of the stadium — to honor those Texans who died in World War I — would be honored,” Little said. “And it was Frank, working with Coach Royal, who maintained that integrity as the newest version became Darrell K Royal-Texas Memorial Stadium in 1996.”

Denius’ familiar face and guiding presence is one to be missed as the Longhorns begin fall camp on Aug. 3.

“He believed in football, because he believed in the spirit of the game and what it taught young kids,” Little said. “He celebrated the victories, hated the defeats, and was always ready to strap on his boots for one more march to the next game.”