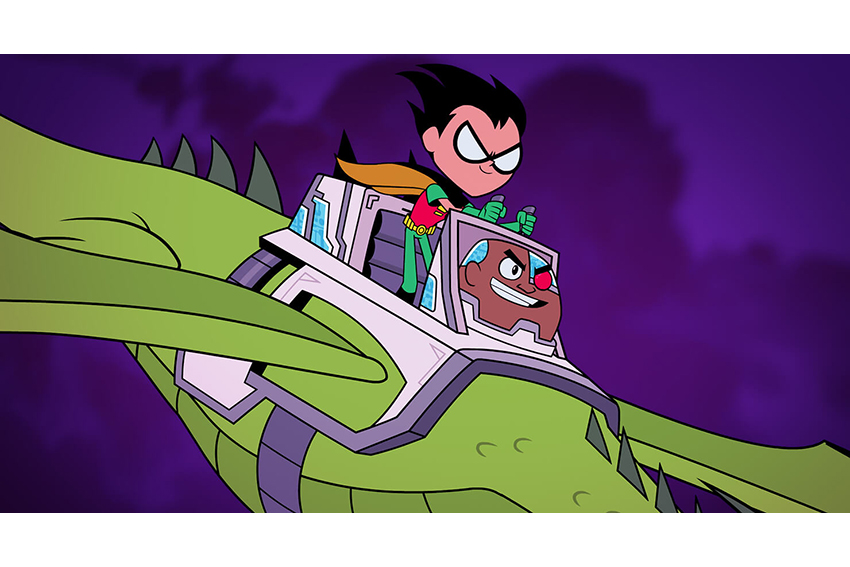 When “Deadpool” was released in 2016, it was violent, profane, but also extremely successful, so of course they made a children’s version!

OK, “Teen Titans GO! To The Movies” is not entirely a rip-off of “Deadpool,” nor is it fair to say it’s entirely a kids movie. Based on the hit Cartoon Network series “Teen Titans GO!,” this film does, however, take a much more self-aware route than the show, aiming to lampoon superhero movies and mostly succeeding in providing madcap entertainment for the whole family.

The story follows the Teen Titans, a super team consisting of Robin (Scott Menville), Cyborg (Khary Payton), Beast Boy (Greg Cipes), Starfire (Hynden Walch), and Raven (Tara Strong). The Titans are upset because blockbuster filmmaker Jade Wilson (Kristen Bell) is making hit movies for seemingly every other superhero but them. Robin takes this the hardest, resolving to earn the Titans their movies by getting them involved with a nemesis of their own: mercenary Slade (Will Arnett).

As one can probably gather from the synopsis, this is a very silly movie. That’s certainly not a bad thing. “Teen Titans GO! To The Movies” throws everything at the screen to see if any of it sticks, and a lot of it does. Writers Michael Jelenic and Aaron Horvath do have a few jokes that don’t land — most notably Robin talking about “shaking my booty in 3D,” yet this doesn’t really matter whenever the jokes that do land are downright hilarious.

The script relishes in skewering superhero tropes. There are tons of digs at past DC disappointments such as “Batman v. Superman: Dawn of Justice” and “Green Lantern,” while conventions of the genre such as tragic backstories are mocked, too. It’s refreshing to see a studio like Warner Bros. so openly make fun of themselves, and it’s even more refreshing to find this in a kids movie.

Moreover, some of the situations the Titans are put into are absurd in the best ways. In order to prevent their fellow superheroes from getting their own movies, they travel back in time to prevent them from becoming superheroes, which leads to some dark gags that have to be experienced to be believed. There were frequent moments where I had to catch my breath to stop from laughing so hard, while also looking around at the parents who were nervously watching due to the risqué nature of some of the jokes.

The film also gets an easy pass in the audio/visual department. The voice acting, like the show, is top notch, and there are some fun musical numbers sprinkled in. Moreover, the animation is a treat. It’s rare to see a 2D animated film these days, but directors Horvath and Peter Rida Mitchell bring tons of eye-popping color and movement to the screen in a way that hasn’t been seen since “The Princess and the Frog.”

If “Teen Titans GO! To The Movies” does have a problem, is that there isn’t a lot of substance. The characters don’t go through complex arcs, the plot isn’t very structured, but do these things matter? No, this film is pure entertainment through and through that is sure to put a smile on your face, adult or child. If the “Teen Titans GO! To The Movies,” so should you.